Durbin: Only Women Who Support Killing Babies Can Be Part of Democrat Party [VIDEO]

Well, the Democrats have finally done it. They’ve finally decided that their entire party line hinges on one issue: abortion. Those of us who disagree with abortion have no spot in the Democratic party, even if we agree on pretty much everything else.

Senator Dick Durbin made it clear that if you’re not prepared to back Roe v Wade, you’re not welcome on his side of the aisle. Way to whittle down your base, Dick. 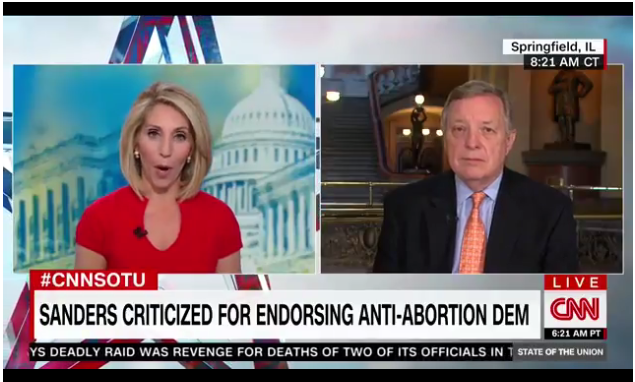 Sen. Bernie Sanders recently endorsed Omaha, Nebraska Mayoral candidate Heath Mellow and has been drawing heavy criticism for it. Apparently Mellow has a less than pristine track record on the issue, not always supporting the “right” for a woman to have an abortion. Despite telling The Huffington Post[2] that he would do nothing to restrict “reproductive rights,” Mellow has become the latest target for left-wing rags like The Daily Kos.

During an interview with CNN’s State Of The Union host Dana Bash, Durbin took the time to address the issue. Instead of calling for unity in an effort to build the Democratic party’s base ahead of the highly-anticipated 2018 primaries, he said that only those willing to back Roe v Wade “can be part of the party.”

“I am committed to women’s rights under the law, reproductive rights certainly, and our party is. We’ve made that part of our platform and position for a long, long time. I know within the ranks of the Democratic Party there are those who see that differently on a personal basis, but when it comes to the policy position, I think we need to be clear and unequivocal. We need to be understanding of those who take a different position, because of personal conscience, but as long as they are prepared to back the law, Roe versus Wade, prepared to back women’s rights as we’ve defined them under the law, then I think they can be part of the party.”

Durbin, I’m going to give you some advice and what you do with it is up to you.

Your party is already on the rocks. You Democrats have proven time and again to be divisive and patronizing, even to the point of driving former Dems into the arms of someone like Donald Trump. You need to learn to be as “accepting and diverse” as you want everyone to think you are, or you’re not going to survive to 2020.