It all fits together — patriarchal oppression, catastrophic climate change, our shameful unwillingness to abort enough babies. I see it now, with help from feminist icon Gloria Steinem:

“Listen, what causes climate deprivation is population,” she said. “If we had not been systematically forcing women to have children they don’t want or can’t care for over the 500 years of patriarchy, we wouldn’t have the climate problems that we have. That’s the fundamental cause of climate change.”

Steinem went on to gibber that allowing babies to live is oppressive “because women are the major agricultural workers in the world, and also the carriers of water and the feeders of families and so on” and so bringing more human life into the world is “a disproportionate burden.”

If we could just put an end to the human race altogether, women would be free of their shackles at last. In addition, the climate would stop fluctuating.

Then Steinem attacked Ivanka Trump for her proposed maternity leave entitlement, on the grounds that it constitutes paying people to have children and is therefore “the same policy as every authoritarian regime on Earth that I know of, including Hitler’s Germany.”

As an influential feminist, this certifiable lunatic has managed to play a major role in the destruction of the family, a major cause of the cultural decay we see all around us. 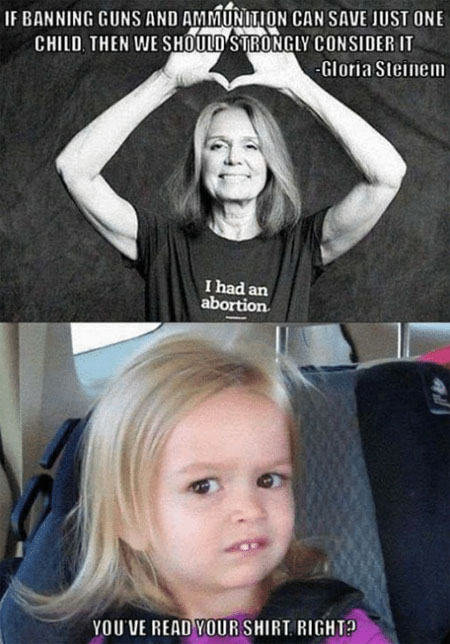 Aborting everyone would also rid us of harmful firearms.