Media ignores something BIG at the March for Life that has everyone else talking.

The annual March for Life[1] is today and it is what didn’t happen there that is part of what should be on the news. There isn’t a trail of trash a foot deep like there was with the Women’s March. There also wasn’t violence, anarchy and destructiveness like there was after the Inauguration. Imagine that… hundreds of thousands of people marched for the lives of the unborn and they didn’t once proclaim they were ‘nasty’ or that they would ‘blow up the White House’. They didn’t dress as vaginas and spew hatred at every opportunity.

These people are the heart and soul of America and they are finally being heard again after eight long years. President Trump has cut off funding for abortions internationally and a bill has passed the House to cut off all funding for abortions here in the US. Next stop, the Senate and it stands a strong chance of passing there as well. Perhaps the butchery of babies will finally be over in America. It won’t bring back the millions lost, but at least it will stop the dark ritual of abortion to a great extent. 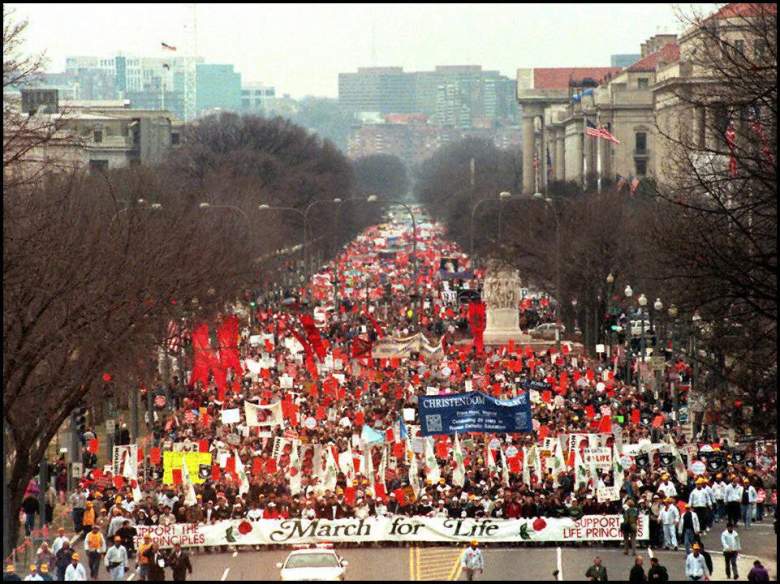 Last week, millions of Donald Trump critics around the country took to the streets to let everyone know how mad they were the election didn’t go their way.

They ended up making a huge mess in the process.

Between the inauguration riots and the “Women’s March” we saw plenty of chaos.

There was violence[3], tons of trash[4] left behind, and even talk about blowing up the White House[5].

Today, hundreds of thousands of people have gathered in Washington, D.C. to stand up for the right to life.

Oddly enough, it looks like it’s possible to get your point across without violence and nasty rhetoric. 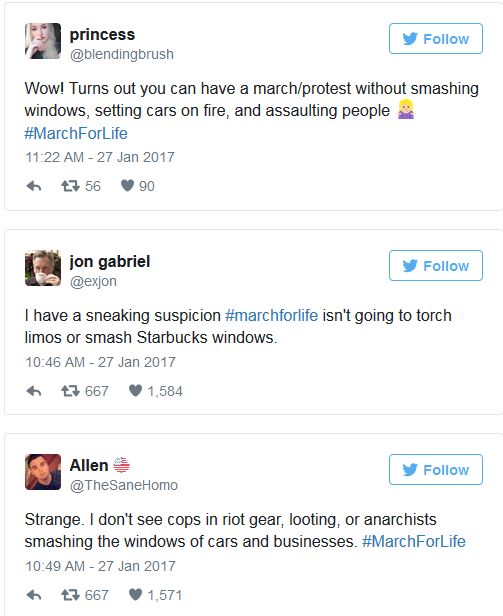 The media doesn’t seem as interested in covering this march and maybe the lack of violence has something to do with it.

This trek was far different in comparison to the other marches over the last couple of weeks… you don’t see any police in riot gear. They aren’t needed here. These are people that love and cherish life. They respect each other. What is primarily missing is the hate and fear of the other marches. These people don’t need that. What they want is justice for the unborn and the love of children and human life to be put first.

The media is covering the March for Life this year, unlike when President Obama was in office. Mike Pence spoke to thousands assembled at the Washington Monument. “We will not grow weary,” he said in a ten-minute address to the assembled throng. “We will not rest, until we restore a culture of life in America for ourselves and our posterity,” He said the administration is determined to end tax-payer funding of abortion and abortion providers. Pence also said that “next week President Donald Trump will announce a Supreme Court nominee who will uphold the God-given liberty enshrined in our Constitution in the tradition of the late and great Justice Antonin Scalia.” Things have changed for the better in DC and moral America is back.