“It’s fresh, it’s modern, it’s clean, it’s caring,” Purdy said. “That’s the brand we’re trying to create,” – your brand is still the murder of innocents[1] any way you look at it. Women are greeted with warm teas, comfortable robes and a matter-of-fact attitude that they are about to take a pill that will kill an unborn child. This is horrific and twisted. It’s wrong. They are trying to put a pretty face on the abortion monster… but the wholesale slaughter of the unborn for profit is still just murder… in fact, it’s genocide. 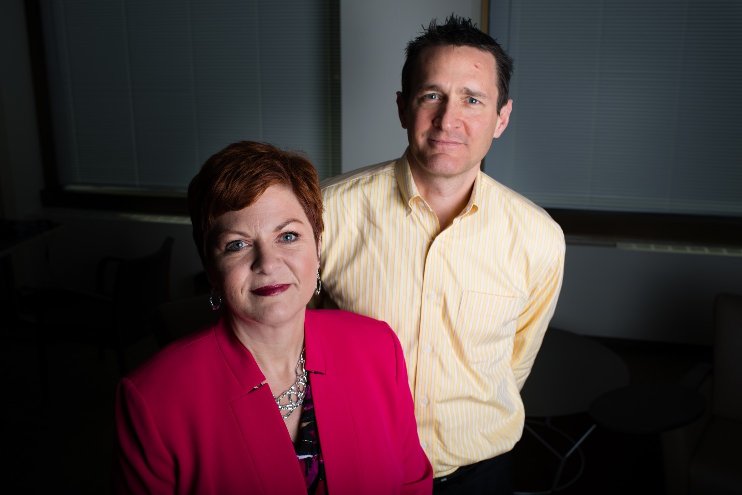 Carafem is a new abortion-pill clinic in Montgomery County that promises a “spa-like”
experience for women with a open and unabashed approach to pregnancy termination. Pictured are
Melissa S. Grant, the Maryland clinic’s vice president of health services, and Christopher Purdy,
president and chief executive. (Sarah L. Voisin/The Washington Post)

With its natural wood floors and plush upholstery, Carafem aims to feel more like a spa than a medical clinic. But the slick ads set to go up in Metro stations across the Washington region leave nothing to doubt: “Abortion. Yeah, we do that.”

The Maryland clinic, opening this week in Montgomery County’s tony Friendship Heights area, specializes in the abortion pill. The advertising reflects its unabashed approach — and a new push to de-stigmatize the nation’s most controversial medical procedure by talking about it openly and unapologetically.

Plagued by political setbacks in recent years, abortion rights activists are seeking to normalize abortion, to put a human face on the women getting the procedure and, in some cases, even putting a positive spin on it.

In Los Angeles County, groups recently sent women door-to-door in conservative neighborhoods to talk about their abortion experiences in the hope of changing minds. A number of Democratic lawmakers have publicly acknowledged having undergone the procedure. And new online projects solicit personal testimonials, including from women who have no regrets about terminating their pregnancies.

“We don’t want to talk in hushed tones,” said Carafem President Christopher Purdy. “We use the A-word.”

The campaign comes as the abortion rights movement is struggling politically. Since 2010, states have enacted more than 200 laws restricting the procedure, and dozens of clinics have closed their doors. Groups on both sides agree that antiabortion activists have the momentum, with a simpler message — “abortion kills” — and a gut-level emotional appeal.

Even Americans who support abortion rights are often deeply conflicted about the procedure. Although a majority of Americans say abortion should be available in most cases, polls show roughly half of those surveyed also think abortion is morally wrong[2].

“Most people in this country do not think abortion is a good thing on its face, even if they deeply believe it should be legal,” said Lanae Erickson Hatalsky, director of social policy and politics for Third Way, a center-left think tank.

Hatalsky praised the efforts to de-stigmatize the procedure, saying the approach is attracting a passionate new crop of young activists to the movement. Telling personal stories, she said, echoes a strategy successfully employed by the gay rights movement, helping it change public opinion by coaxing people to come out of the closet to their friends, neighbors and colleagues.

“We need to talk about ending a pregnancy as a common, even normal, event in the reproductive lives of women,” Pollitt writes, adding that the decision to abort can be “just as moral as the decision to have a child — indeed, sometimes more moral” because “part of caring for children is knowing when it’s not a good idea to bring them into the world.”

They go door to door to bond with other women by telling their stories and trying to convince conservatives that murder is really okay… it’s just a pill, a simple medical procedure. For $400 you too can get a pharmaceutical abortion in a clinic that will have wood floors and a natural wood tone on the walls that recalls high-end salons such as Aveda. Appointments, offered evenings and weekends, can be booked online or via a 24-hour hotline. Go in, take a pill and in a couple of days you abort. Easy-peasy. And they are using the same tactics the radical gay activists are to make it seem that this is mainstream and just, well, normal. I find this disgusting and evil and it is being treated like a civil right. What about the rights of the unborn? Who will speak for them?