North Carolina is headed in the right direction when it comes to protecting the unborn and the American taxpayer.

In a move that liberals will decry as “anti-women,” the state has decided to take it upon themselves[1] to make sure common sense restrictions are placed on the abortion industry. 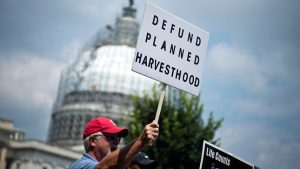 The bill, a reaction to The Center for Medical Progress undercover videos chronicling Planned Parenthood officials discussing the sale of organs from aborted babies for medical research, and appearing to break a number of federal laws in the process, passed the state House on Monday, and the state Senate the week prior.

Planned Parenthood claims its North Carolina locations do not participate in what they call tissue donation, leading GOP State Rep. Sarah Stevens to conclude that supporting the bill “shouldn’t be a problem.”

Groups paying for and conducting abortions should have never been subsidized by the American taxpayer. And it is even worse that the sale of human baby body parts is something that must go into law now because of the deplorable Planned Parenthood videos.