Now that Pope Benedict XVI has resigned who should replace him? 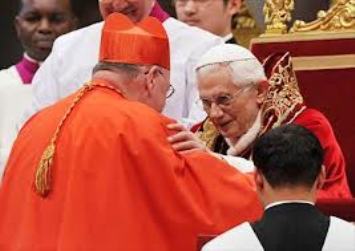 [1]
Pope Benedict XVI sudden resignation brings with it history, health, and heroics. He is the first Pope to resign in almost 600 years. His age, declining health, and strength were all reasons for his resignation.

The 85 year old head of the Catholic Church stated, “After having repeatedly examined my conscience before God, I have come to the certainty that my strengths, due to an advanced age, are no longer suited to an adequate exercise of the Petrine ministry. I am well aware that this ministry, due to its essential spiritual nature, must be carried out not only with words and deeds, but no less with prayer and suffering.”

He continues, “However, in today’s world, subject to so many rapid changes and shaken by questions of deep relevance for the life of faith, in order to govern the bark of Saint Peter and proclaim the Gospel, both strength of mind and body are necessary, strength which in the last few months, has deteriorated in me to the extent that I have had to recognize my incapacity to adequately fulfill the ministry entrusted to me.”

The words The Pope chose were very revealing. At one point he talks about the physical strength it takes to lead the Catholic Church. On the other hand he reveals the emotional toll it has taken on him as well. When one feels as though they are fighting a battle that doesn’t seem to be getting any easier it has a profound affect on them; especially the elderly.

When The Pope talks about questions in deep relevance he is referring to America turning their backs on God as a society. The rapidly changing world he is referring to is the speed at which more Americans than ever are denouncing the Church by switching from the Catholic faith to the religion of Social Justice.

The practice of Social Justice by the Catholic Left has been gaining in political power in America and around the world for years. From embracing Gay Marriage and homosexuality to the acceptance by many Catholics of the practice of abortion the Catholic Left has been gaining in influence. The sanctity of life has devolved into the rejection of capital punishment while simultaneously negating the value and rights of the unborn. The dignity of every human life has been distorted by the practice of euthanasia for unwanted babies and the elderly infirm.

Fighting for your values is not an easy task. It can be draining both psychically and emotionally. It is also not a young man’s game either. Pope Benedict XVI realized this and understood that in order to help the Catholic Church move forward that he would need to take a step back.

So who should replace him?

Given the factors that lead to Pope Benedict XVI decision to step down the next Pope should be younger, healthier, and stronger both psychically and emotionally. He should be more charismatic and possess more passion. He should be able to fight to preserve the Catholic Church and its teachings worldwide and never back down from an ideological challenge.

There has never been an American Pope in the entire history of the Papacy, but maybe that could change. Although history and long odds are stacked against him, the perfect replacement for Pope Benedict XVI would be the current Arch Bishop of New York Timothy M. Dolan.

Cardinal Dolan is relatively young at age 63, he is in seemingly good health, and he has already proven to be a much needed and reliable conservative voice for not only the Catholic Church but more importantly for our Judeo-Christian nation as a whole.

Cardinal Dolan has been on the frontlines in the battle for religious freedom. He was a leading voice against the Obama Administration’s far reaching mandate on contraception. In a CBS interview, Cardinal Dolan condemned the interference of the government in what he viewed as the outright dismissal of the right to religious conscience and freedom. His position lead to the Obama Administration slightly changing their policy in regards to the contraception mandate.

Cardinal Dolan is also staunchly pro-life. During the 2008 Presidential Election, Cardinal Dolan strongly rebuked then Senator Joe Biden and Speaker of the House Nancy Pelosi for misrepresenting timeless Church doctrine on the issue of abortion. He also criticized the University of Notre Dame for allowing the most radical pro abortion President in the history of the United States to give the graduating class its commencement speech, calling it a “big mistake.”

There are a host of other great reasons why Cardinal Dolan would be the best choice as the new Pope but the main reason is he has been a proven fighter against the left and particularly the Obama Administration. He has been that constant thorn in the side of Barack Obama and the rest of the leftist ideologues in America. He will not back down in the battle between traditionalism and secularism. He understands the threat the Catholic Church is facing from Socialism, Communism, Marxism and Islamofascism here in America and around the world.

America and the rest of the world need a new spiritual leader with the capability, charisma, and intellect to change disbelieving hearts and minds. Our religious freedoms and long standing traditions are under constant threat from an enemies both foreign and domestic. Having someone like Cardinal Dolan in our corner will give us the strength and determination to endure these battles and emerge victorious.
..

Suggested by the author:
www.joshbernsteinpoliticalwriter.com[3]
Traditional conservatism versus secular liberalism and the Jewish voter
Why The Defense of Marriage Act should never be repealed
Are we still a center right country?
Exposing the tactics and language of the left