Liane and Iain Stooke were told their baby Miley was brain damaged. They were advised to abort her. 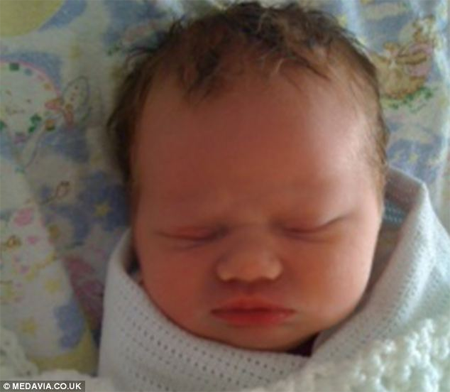 The couple agonized over the decision and decided to give their little girl a chance at life – and their instinct paid off. Miley was born perfectly healthy – a shock to them after the doctors’ assurance she would have physical problems and that the imaging and diagnosis had been wrong.

Mrs Stooke added: ‘It was a waking nightmare. We agonised every minute over what to do – and every time I felt her kick inside me, my heart broke.:

‘We didn’t know whether we could face aborting our baby, but at the same time we wondered how we would cope with a disabled child.’

Six weeks before her due date the couple arrived at the hospital for a meeting where they would give their final decision.:

‘Driving to the hospital, even at that late stage, we still didn’t know what to do,’ said Mrs Stooke.

‘I just couldn’t let go of my child, but I also had to think of the baby’s quality of life.

‘My instinct was that if the child would one day be capable of recognising us and of knowing who we are, we couldn’t go through with it.

‘We were told there was still a very slim chance that the baby would recognise us. We exchanged a look and both knew instantly that we couldn’t agree to the termination.’

The couple braced themselves and Mrs Stooke delivered her daughter by Caesarean section in October 2011.

After the birth, the couple, from Bristol, were amazed to discover that, far from being physically deformed, their daughter was perfectly well.

How often is this the case? How often are children murdered because a doctor said it would be best?

And now, under Obamacare, people are being forced to help make it possible.