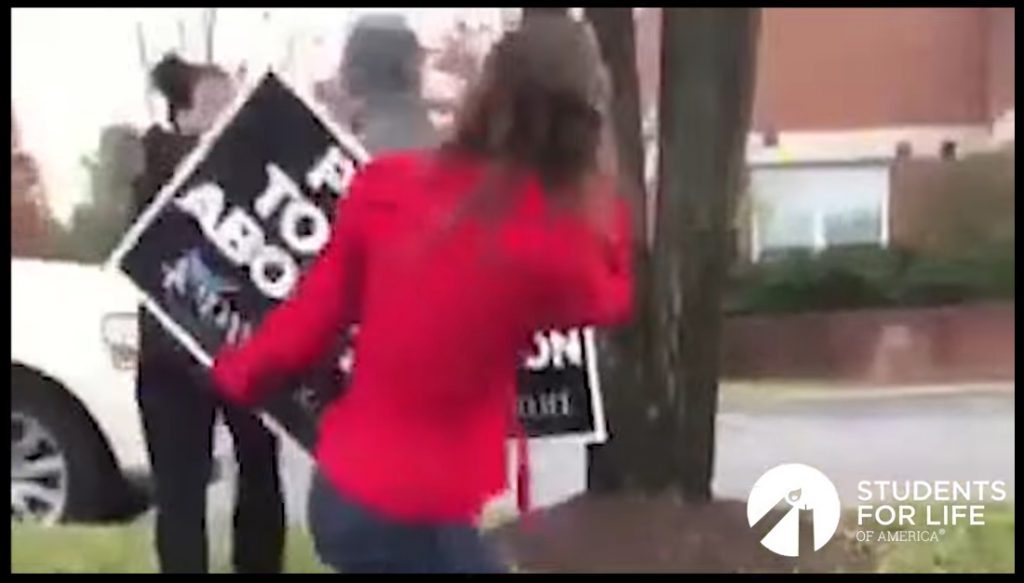 This weekend, students involved in a pro-life group set up a demonstration outside of a Planned Parenthood building in Roanoke and one student, who was taking footage, recorded what has been alleged to be an assault on a 15 year-old holding a pro-life sign.

The group, Students for Life America, were from the nearby Liberty University, which is located in Lynchburg, Virginia and has more than 15,000 students with a further 110,000 taking online education. They are perhaps best known for their University President, Jerry Falwell Jr., whose father Jerry Falwell founded the school as a Baptist College in 1971. President Trump recently spoke at the campus. Put all that together and you have a nice campus perfectly built to tick off crazy lefties.

So, when the student group set up their weekly “sidewalk counseling” last Saturday outside the building that hosts abortion services on that day every week, the students engaged in their usual activity of praying for the women who were going in and to encourage or offer alternatives while standing away from the building’s entrance. One of the attendees of the rally was a 15 year-old female student, who is a SFLA fellow at a local high school.

An unidentified woman confronted the students and threatened to “f**k them up.” The students say they were standing on public property and said to the woman threatening them that “this is our property,” to which she responded “and it’s my property too,” before she yanked a sign from one student. The sign said, “All people are made in the image of God” and that’s when the footage starts.

The woman allegedly punched the 15 year-old in the red coat in her face and you can see her stumble in the video. Fellow students called for police and the student was reportedly taken to hospital to be checked over.

SFLA’s president, Kristan Hawkins, said that it’s “horrific that a minor expressing love for pregnant women was targeted for violence,” saying that this has happened before, calling it a “sad reflection on the state of debate today.”

A few weeks ago, Rep. Steve Cohen insulted a woman who had four abortions at an earlier stage in her life before becoming a pro-life, pro-marriage activist[2]. The Democrat from Tennessee said that the woman, Star Parker, was ignorant and had an “inability to deal with Congress people.” Given that Ms. Parker is black and that abortion hits black communities hard, this series of angry words was not taken very well.

In South Carolina this August, Gov. Henry McMaster signed an executive order that cut off all government-supplied funding to abortionists. The order’s language said that “any physician or professional medical practice affiliated with an abortion clinic” would no longer receive money[3].