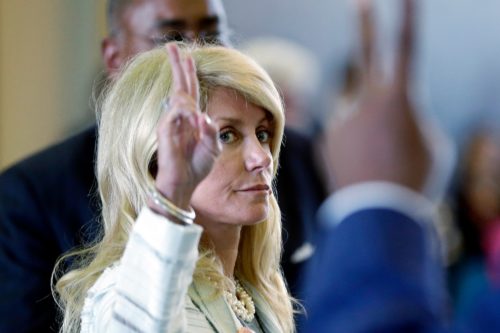 Former Texas Senator and abortion activist Wendy Davis[2] gave a speech this past Thursday in support of Planned Parenthood at a fundraiser in South Carolina. The state is considering a bill that would legally define life as beginning at conception. Ms. Davis asserted in her speech that the belief that life begins when sperm meets egg is “absurd.”

In response to this assertion by Davis, Ben Shapiro tweeted the following:

No, absurd was your gubernatorial run https://t.co/ScZPCip9M5[3]

As always, Shapiro is a man of few but effective words. He nailed it. Davis ran for governor of TX against Greg Abbott in 2014. Predictably, as a Liberal, she won only a few urban areas and Liberal counties, but lost the rest of the state to Abbott, the current governor of TX. He had 59% of the vote to her 39%.

Apparently, the women of Texas weren’t really impressed with her 2013 11-hour filibuster of an abortion bill in the Texas senate. In fact, they may have thought it absurd. When Davis ran for governor, there were a number of outright lies and omissions in her public biography. The issue became quite a scandal. Lying does not tend to impress voters either. And this is the woman who is attempting to tell us that it’s absurd to think life begins at conception.

If it isn’t human life that begins at human conception, what is it? Is it death? Is it limbo? Is it a puppy or a yeti? Logic matters Ms. Davis. Humans conceive humans. That’s just how it works, regardless of your personal agenda or inability to grasp facts.

It looks like Shapiro is right. Given her lack in the area of critical thinking and logic, it’s absurd that she ran for governor of Texas. The good people of Texas saw right through her sham of a campaign. Planned Parenthood should keep hiring speakers like Wendy Davis. Every time she opens her illogical mouth, that’s fewer dollars in the PP coffers.

In John Hawkins’ new book, ‘101 Things All Young Adults Should Know’, he teaches in chapter 10, “People are what they are and probably are not going to change much once they reach adulthood.” As we watch the career of Wendy Davis, we see this is true. Get a copy for some young people you know!