WHAT THE?! EPA Employees Worked With Dems To Sabotage Trump’s Pick…THEIR BOSS!

God bless Oklahoma![1] Scott Pruitt was confirmed this week as the Director of the Environmental Protection Agency. He proved over and over in Oklahoma that he is no friend to the EPA and has vowed to get rid of the agency. He’s now actively working to put himself out of a job and I can’t wait. He should start issuing pink slips immediately and clean out that environmental sewer. Then he can expose all those nasty secret documents that have been hidden by those that work there. Pruitt is what I call environmentally friendly to Americans and a stone cold enemy of radicals and Marxists.

In a panic move, the agency urged employees to call their Senators. It didn’t do them a damn bit of good and I am all kinds of good with that. Former Oklahoma Attorney General Scott Pruitt was indeed confirmed as the new Director of the EPA on Friday, obviously to the chagrin of the employees of the agency he’s about to lead. Pruitt isn’t the hiring kind… he’s the firing kind when it comes to the EPA. I’ve never seen government employees actively try to block the nomination of their incoming boss. I guess they never heard of the Hatch Act which prevents government employees from lobbying. Sucks to be them. 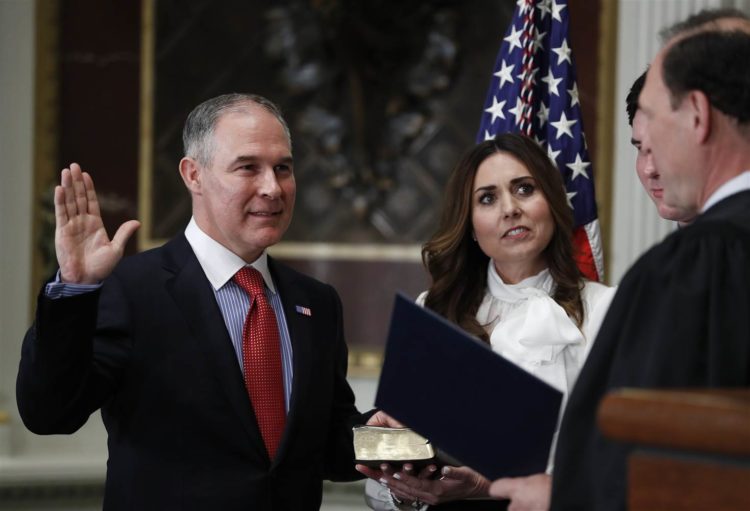 “In a last-ditch effort to block the confirmation of President Trump’s Environmental Protection Agency director nominee Scott Pruitt, EPA employees have resorted to calling their senators.

(Ahead of) Pruitt’s confirmation vote… employees at the agency (were) growing increasingly worried about the possibility of a new boss who has vowed to “get rid of” the EPA and who sued the EPA “at least 14 times” while he was Oklahoma’s attorney general, The New York Times reported.
“It seems like Trump and Pruitt want a complete reversal of what EPA has done. I don’t know if there’s any other agency that’s been so reviled,” said EPA lawyer Nicole Cantello. “So it’s in our interests to do this.”

The bold and blatant effort is out of the ordinary, and perhaps unprecedented. “I’ve been here for 30 years, and I’ve never called my senator about a nominee before,” an EPA employee in North Carolina told The New York Times. Former EPA employee Judith Enck said the rebellion reveals how desperate EPA employees are to block Pruitt. “EPA staff are pretty careful. They’re risk-averse,” Enck said. “If people are saying and doing things like this, it’s because they’re really concerned.”

The ongoing actions of the EPA and those connected to it certainly should not be tolerated. And I am sure that Pruitt knows that almost all of them must go because they will block and betray him at every turn. They’ve already said they would and have proven it. He’s not alone… while Tillerson is abroad, there was ordered an absolute bloodbath at the State Department[4]. He’s aggressively cleaning house as well. Most of the seventh floor there was sent packing yesterday. If I were a leftist at the EPA, I’d be shopping for a new job and fast as well.

These people are actively trying to sabotage the Trump administration. It’s well past time for a solid purge. No one is untouchable and they work for us. I hope Pruitt aggressively goes after the subversives at the Environmental Protection Agency. And someone for God’s sake, go after the Bureau of Land Management while you are at it. Pruitt is a good and honorable man. He’s on the hunt at the EPA and he’s going to clean house of Obama and leftist operatives.