America Hating Colin Kaepernick Shares Columbus Day Message: ‘We’ve Made a Legend Out of a Massacre’

Gee, just when you think Colin Kaepernick couldn’t be an even bigger douchebag, he surprises you and becomes one. He has a Columbus Day message for all of America… in fact two. “I hate America and all she stands for,” is the first one and then he’s stating that we have made a legend out of a massacre over Columbus Day. What bull crap. Columbus is the man, or one of them, responsible for discovering our nation. For his time, he actually spoke well of the natives, defended and treated them with respect at times… at others, he was cruel to them. But then again, the Indians slaughtered his men (who pretty much had it coming). Regardless, Columbus is a huge part of history for this country and as far as I know, he did not massacre the Indians.

The Indians were not all sweetness and light, no matter what the left claims. They bought, sold and owned slaves. They slaughtered each and those that came over to settle the New World. War and killing were a way of life for them. But just like any other people, there were good and bad among them. That’s true with us as well. I want to know about Columbus… his good and his bad points. But don’t tell me that he started a genocide or committed a massacre. Go back to your kneeling and radical plotting, you bore me. 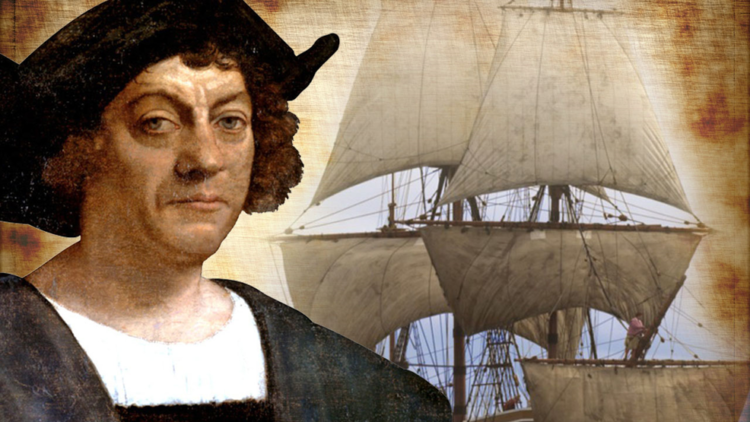 Kaepernick has pretty much singlehandedly ruined the NFL and the last refuge for many Americans to get away from politics and all this leftist crap. He’s started a racist trend that is still motoring along out there and he’s really ticked off President Trump, along with most of America. Kaepernick has stayed very active on social media, trying to stir things up. So, of course he wasn’t about to let Columbus Day pass by without making a stink over it.

He retweeted college professor Christopher Petrella of Bates College, who shared an image of Columbus discovering America and raising a Christian cross in the background accompanied by a quote from author James Baldwin: “These stories are designed to reassure that no crime was committed. We’ve made a legend out of a massacre.” – Baldwin. For added hatred and violent instigation, he used the hashtag #AbolishColoumbusDay. Nice and a total fabrication. I guess this is Kaepernick’s way of wishing us all a happy Columbus Day. You know what would make my day perfect? If Colin Kaepernick would stuff it and never show his mug again or open that pie hole of his.

I’m beyond sick of leftists trying to destroy our history and bring down or deface statues. I’m fed up with their revisionist history and their hate mongering. Kaepernick is a vile and evil man who would love to see blood in our streets. Columbus left his mark in history… all Kaepernick will be remembered for is being a lousy football player and an American-hating asshat.

"These stories are designed to reassure that no crime was committed. We've made a legend out of a massacre.” -Baldwin#AbolishColumbusDay[2] pic.twitter.com/zG0LJfurES[3] 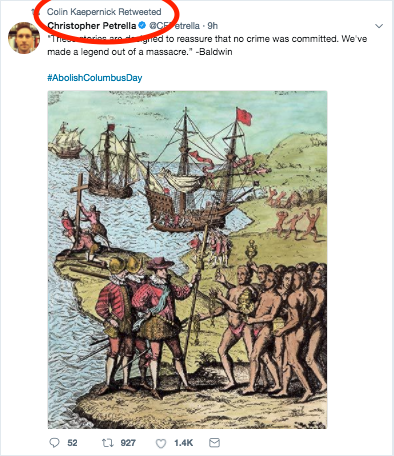