A Martin Luther King Day tradition which sees hundreds of dirt bikes and all-terrain vehicles take to the streets of Florida has been criticized. Not hard to take a guess at why, because clearly riding your off-road vehicle a) into the road, and b) into oncoming traffic is the best way to honor Dr. King’s legacy. What a bunch of fools[1]: 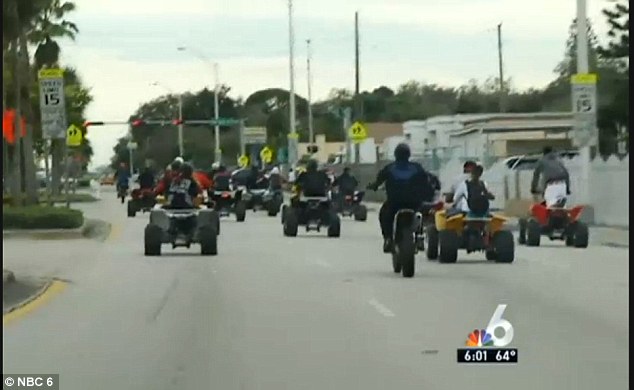 The parade of bikers tore through parts of the state on Monday for the second year in a row, prompting critics to question if this was the message the Civil Rights leader would have wanted to spread.

One Twitter users described them as ‘pathetic gangsters’ while police uploading pictures of hundreds of illegal bikes they had confiscated throughout the day.

The bikers are believed to have traveled from as far away as Washington to be part of what they say is a protest against police brutality.

However the police have said the event is dangerous and illegal. Cops are left helpless as they cannot chase all of them.

There was serious injury in Fort Lauderdale and another rider had to be airlifted to hospital after crashing his bike in Miami-Dade.

‘They are running red lights. They are not in Coral Springs, but we remind our followers to be cautious on the roadway.

‘This in NO way is the message Martin Luther King, Jr. spread for peace. As indicated by these dangerous drivers calling it an MLK Ride.’

Marvin Dunn, a professor and veteran of the Civil Rights movement, told NBC Miami the two-year tradition was especially stupid: ‘If someone had asked me what is the dumbest way to honor the legacy of Dr. King, I would say, “Get a hundred bikers, put them on I-95 at 70 miles an hour terrorizing the public”.

‘That’s the dumbest way you could possible come up with to honor Dr. King.’

Other opponents also slammed the group’s actions on social media.

Trainna Shepard said on Twitter: ‘This [sic] reckless idiots with bikes #mlkrideout are a total shame of what this day remembrance truly is. Pathetic gangsters endangering ppl.’

Angela Morabito added: ‘MLK has a huge, remarkable legacy. Riding an ATV into oncoming traffic isn’t part of it. #MLKrideout, what are you even doing?’

Meanwhile, in San Francisco, Black Lives Matter protesters chained themselves to cars on the Bay Bridge to stop traffic.

One of the demonstrators was seen being arrested and detained by cops.

It was part of the Reclaim MLK Day movement.

Maybe these folks should come up with a way to ACTUALLY honor Dr. King instead of looking for excuses to terrorize Florida, redneck style.