You hear a lot of moaning and groaning about how terrible the new generation is and how we’re a bunch of entitled, privileged brats who didn’t get spanked enough growing up. You’ll hear about how we’ve been brainwashed into hating America and idolizing socialist utopias like Venezuela, but that’s simply not the case.

In fact, a couple of elementary school students in Florida are proving that there may be more hope for millennials than people give us credit for. 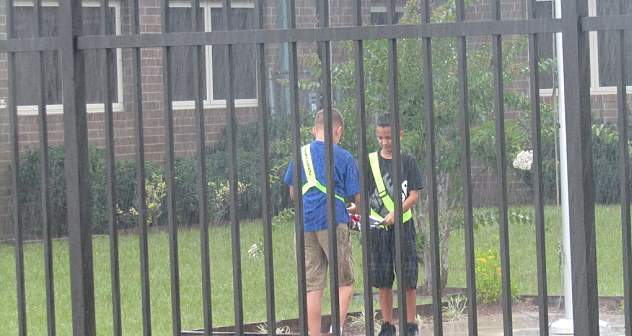 Two 11 year-olds, Isaac Davis and Nate Helmath, are being praised for how they treated the American flag during a rainstorm.

The Coppergate Elementary School students went into the courtyard and pulled down the American flag, quietly completing the 13 folds and bringing it into the school.

School officials posted about the incident on their Facebook page, where they celebrated the respect shown to the flag from men so young.

“This is what RESPECT looks like at Coppergate. Two of our safety patrols, Nate and Isaac, quietly went to the courtyard and completed their flag duty in a driving rainstorm. Not only did they bring the flag down, they also stood in the wind and rain and calmly completed the 13 folds. Nate protected the flag as he walked with honor and respect to retire it for the day.”

When asked why they did what they did, each child had a heartwarming response.

Nate, whose parents served in the Armed Forces, said that he believed it was “the respectful thing to do.” Issac stated “I feel like we have good people in the country and that we should all be good.”

In this time, it’s quite easy to become cynical of younger people, some of whom take to the streets to engage in violence when they don’t get their way. We just have to remember that there are more children like this out there who put them all to shame with their amazing respect and dignity.