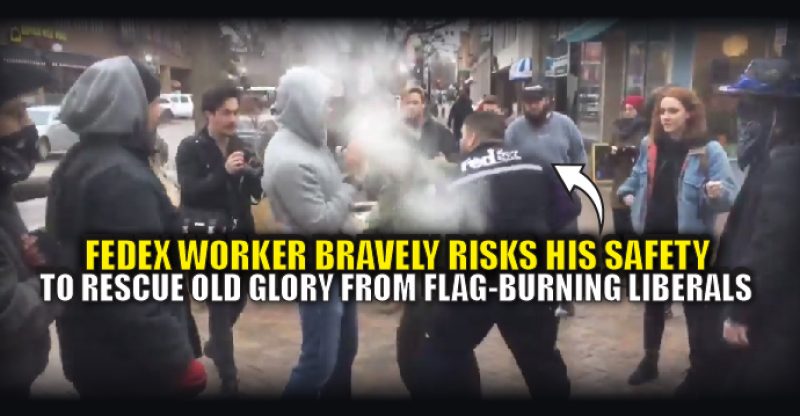 “When I see the flag, I see racial injustice,” said Paul Osgerby of Iowa City. “I see social injustice from Native American genocide to African-American slavery to failing to recognize women as citizens until the 20th century.”

Sentiments like this led to a series of flag burnings in Iowa yesterday. And the responses they have received, especially from this man, are pretty awe-inspiring.

This FedEX driver went up to the burning flag and used a fire extinguisher to put out the flame and walked away carrying the flag. Onlookers were all willing to share how they felt. A heated argument soon took place. Watch the drama unfold below as they fight over the stars and stripes.

Happening now: a confrontation on the ped mall as people burn an American flag as protest. pic.twitter.com/aPkMdls6oQ[2]

I have so much respect for this man who was willing to protect the flag. Although it is within their right to burn the flag, it shows a lack of understanding and respect for the country they have. America is not perfect and it is certainly struggling right now, but we are so blessed to have what we have. There is so much in the world that is combating our freedoms.

They are trying to fight fascism…. maybe they should go to a country that is actually fascist and fight there.

This man is a hero.