Philanthropist Buys Entire Toy Store to Give to Homeless Children

A lot of people give toys where they can around Christmastime, but rarely does someone donate an entire toy store. One woman saw a way to help, and made Christmas possible for so many children[1]: 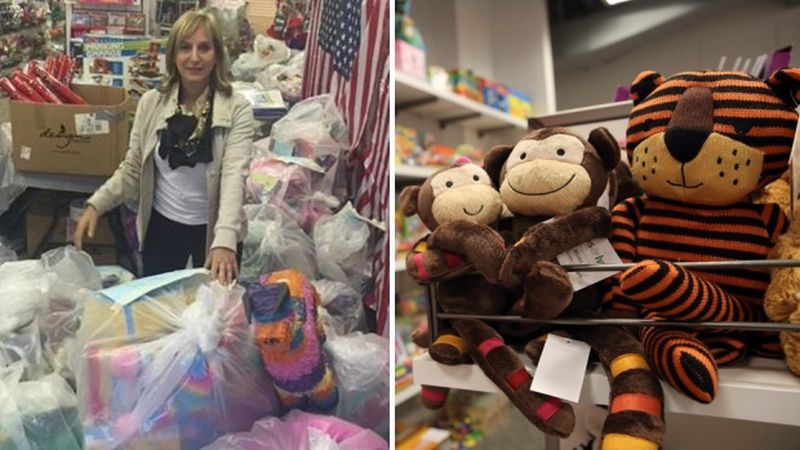 Carol Suchman, a New York City philanthropist and venture capitalist, had been walking past a closed toy store in the high-end West Village neighbourhood. When she thought about the toys sitting inside Hudson Party Store with no one to play with them, she decided they could be put to better use in the hands of a child.

“The toys in there looked so sad, and they were gathering dust,” she said to CBS News. “It occurred to me we should bring those toys to where they should be going — to all the homeless kids in the city.”

Suchman anonymously buys birthday gifts for foster children, and decided that for this year, she could give gifts much more broadly. She reached out to Hudson Party Store’s owner and asked if buying the remaining stock was a possibility.

“We talked and negotiated and bought the entire toy store,” Suchman said to ABC News.

Then there was a matter of actually giving the gifts to the children. Suchman has been on the board of a non-profit, Free Arts NYC, and asked if they could take care of distribution.

With more than a thousand toys, Free Arts couldn’t handle the task alone. Suchman and the non-profit reached out to the city’s Department of Homeless Services to see if they could get the toys to shelters.

“I was a little bit floored by the whole thing. I thought it was totally fantastic,” Antonio Rodriquez, the director of special events at the department, told CBC News.

Despite the city’s reputation, he explained that in New York City people and companies give thousands of toy donations every year.

“But this is the first time an individual has donated a whole toy store,” he said.

About two weeks ago Rodriquez and several volunteers came down to the West Village to gather what turned out to be 35 “huge” garbage bags of stuffed animals, games, art supplies and school supplies. Rodriquez estimated that each of them were about a metre and a half tall, with items sorted by age and gender.

These bags will then be distributed between shelters in all five New York City boroughs and will be given out at various holiday events throughout the month.

Large donations like this are out of the ordinary Rodriquez said but they may not be the most outstanding kind of donation, at least long term.

“Sometimes maybe a small church is able to give out toys to 100 kids, but they’ve been doing it for 20 years so they end up servicing thousands of kids,” he said.

More than 23,000 children use homeless shelters in New York City according to the Department of Homeless Services, so no matter where they came from, these toys will likely not be short of kids to play with them.

“It’s been in the news a lot that there are more children in the system than ever, and that breaks my heart,” Suchman said to CBS News.

It may be just a toy for some people, but for these kids, it may very well be the whole Christmas. We can’t all afford to buy a whole store, but most folks can afford a single toy to donate. Consider skipping a coffee for a couple days and donating a gift instead this year. You may change a child’s life.