It looks like that plane crash in Anchorage, Alaska earlier this week may have been something of a suicide bombing[1] arising out of a domestic issue. 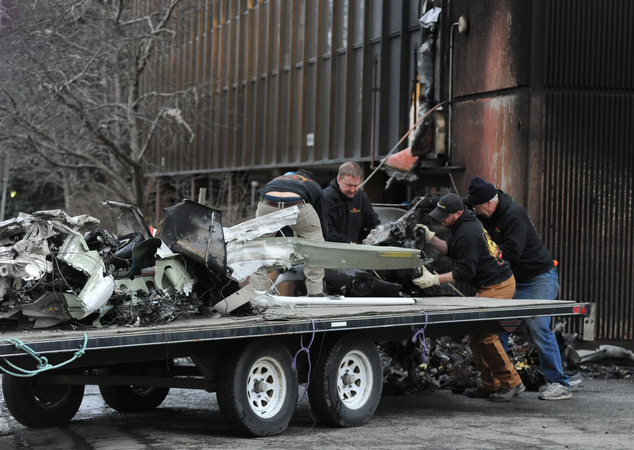 Authorities declined to comment Wednesday on any possible connection between a deadly plane crash in downtown Anchorage and the fact that the pilot’s wife worked in one of the two buildings the small plane hit.

Demarest was flying a Cessna 172 owned by the Civil Air Patrol when he clipped the building that houses law firm Dorsey & Whitney and then crashed into an unoccupied commercial building. He died at the scene, and no one else was hurt.

Demarest joined the Civil Air Patrol five years ago, but the civilian auxiliary of the U.S. Air Force called the flight unauthorized. The Civil Air Patrol is made up of volunteers who help with search and rescue, disaster relief and homeland security across the country, according to a statement from the national group.

Authorities, including the FBI, declined to say whether there was any link between the crash and Dorsey & Whitney, where Demarest’s wife Katherine works as an associate lawyer. She could not be reached for comment Wednesday.

‘Based on the very limited facts we have, we believe it was a personal tragedy and a tragedy for this family,’ Bryn Vaaler, chief marketing officer with Dorsey & Whitney’s Minneapolis office, told Alaska Dispatch News. ‘She is a valued employee and is obviously involved in a personal tragedy, so that’s all I can tell you.’

Witnesses who were downtown at the time of the 6:18am crash, say they saw the plane circling the building housing the Dorsey & Whitney Offices before clipping the building’s windows and crashing into another vacant building.

‘It flew over us twice and then crashed,’ witness Thomas Connell told ADN. ‘It was just way low, and then it started sinking on in.’

The FBI would only say they don’t think the crash had anything to do with terrorism, and one wonders whether Demarest was really trying to kill anybody by flying into the building that early in the morning.

It’s hard to imagine it was just a coincidence that he hit his wife’s office building, though.