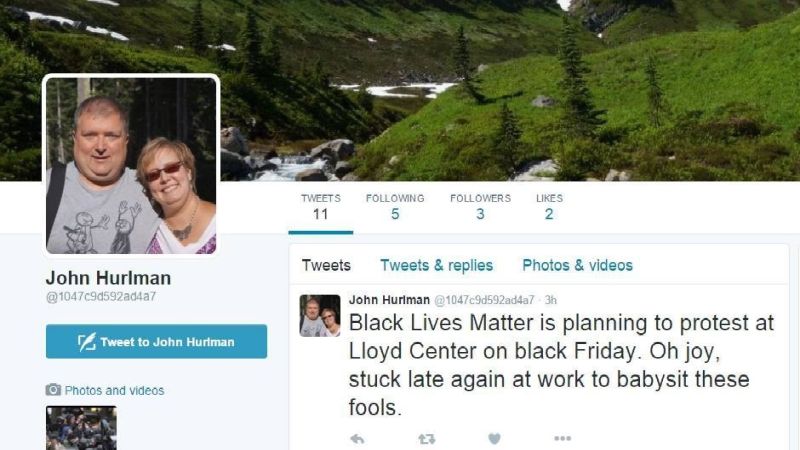 “Black Lives Matter is planning a protest at Lloyd Center on Black Friday. Oh joy,” Hurlman, of the Portland, Oregon, police department, wrote in a since-deleted tweet. “Stuck late again at work to babysit these fools.”

After the backlash that followed his tweet, Hurlman — who’s been on the force for more than two decades — was reassigned until an investigation of his Twitter posting is complete, Portland Police Acting Chief Donna Henderson said Tuesday, KGW-TV reported.

“This post is in no way a reflection on how members of the Portland Police Bureau view these community groups or their peaceful expression of free speech,” Henderson explained in a statement.

Local community activist Teresa Raiford told the Oregonian she is “highly offended” by Hurlman’s tweet and found it “very unprofessional.” But not everyone shares Raiford’s perspective. Some on Twitter have come to the officer’s defense:

Oh, John Hurlman called them fools, so you assume he's a racist? You are moron. https://t.co/uURS0Zkl1i[3]

The protest — “Black Lives Matter, Not Black Friday” — was scheduled by Don’t Shoot Portland to take place on Black Friday for those who believe “black lives and your life matters more than Black Friday cheap deals.”

“Of course he would protect anyone’s right to free speech and protest,” she wrote on her Facebook page. “Black Lives Matter is a movement created to give voice to racism, and of course anti-racist discussions are valid and important. It was not his intention to belittle their cause …”

She added that her husband is a “good man with a good heart.”

This is not the first time Hurlman has come under fire for his opinions. In 2012, he texted officers following the federal justice department finding that Portland police used excessive force against people with mental illnesses. The Oregonian reported that the text referred to two federal law enforcement debacles. Hurlman later said the text was inappropriate and apologized.

Hurlman made national news in 1997 when he shot and killed a neighbor’s 3-year-old Labrador retriever named George while jogging in Hillsboro. According to Oregonian reports from the Multnomah County Library archives, Hurlman was indicted on misdemeanor charges.

Hurlman claimed he was acting in self-defense, but a witness said George was just playful.

This is just stupid. Whatever happened to his First Amendment rights to express himself? Just because you speak the truth doesn’t make you a racist.

Written by Katie McGuire[12]. Send your hate mail to the author at [email protected], or feel free to mean tweet me at @GOPKatie[13], where I will be sure to do very little about it.