Why am I not surprised[1] that this happened in the Chicago area? Back in August of last year, in Spanish class at Eisenhower High School in Blue Island, Illinois, a student refused to stand for the Pledge of Allegiance. He said to his teacher that “America sucks.” The boy’s family fully supported his unpatriotic, defiant attitude. The mother apologized for her son’s language, but would not condemn him for his move because she considered it a statement against oppression and police violence. Hello, Black Lives Matter.

When Thug Jr. pulled it again in that class, the teacher tried to force him out of his seat. The next thing you know, the family is threatening to sue the school and the teacher. Frankly, since the Pledge of Allegiance is part of school policy, I would expel the student and be done with it. But that’s not how schools roll anymore I guess. The mother cited her father who served in World War II… his service does not translate to hers or their family. I bet he’d be ashamed of his grandson’s behavior.

A Chicago-area mother is outraged after her son’s school denied his choice to sit for the Pledge of Allegiance.

Shemar Cooper, 15, says he decided to sit down for the Pledge of Allegiance during his Spanish class on Aug. 26 at Eisenhower High School in Blue Island, Illinois. When his teacher told him he had to stand up, he refused, telling her he didn’t want to because “America sucks.”

Shemar’s mother, Kelley Porter, apologized to the teacher for her son’s language, but said she would not apologize for his choice to sit down for the pledge.

The teen’s family thought the issue was resolved until he went back to his Spanish class after the weekend. When he chose to sit once again for the pledge, he says the teacher attempted to physically pull him out of his seat.

Porter reported the incident to Blue Island police and threatened to press charges against the teacher.

The mother says she is proud of her son for making a statement against oppression and police violence. She said her family has served their country proudly, pointing out that her father served in World War II.

“America doesn’t respect blacks,” Shemar told WGN. “Until they stop killing us, I’m not going to stand up.” How about blacks quit killing police officers and other Americans and we’ll call it even? What a liar this woman is. She’s a racist and a cop-hater too. Porter added, “We don’t hate America. It’s the behaviors that are put out from some of the people towards black people that we disapprove of.” She’s delusional… for the most part that just isn’t true. It’s propaganda to stir up race hatred and to denigrate the police.

The mother and son say they were unaware of the controversy in the NFL involving San Francisco 49ers quarterback Colin Kaepernick, who refused to stand for the National Anthem at a game for similar reasons, at the time of the incident. And you know that is a lie too. They had to of heard of Kaepernick. It was everywhere, especially in the black community. The principal of Eisenhower High School released a statement in response to the incident, saying “Eisenhower High School takes any allegations of violations of students rights seriously. We respect students’ First Amendment right to not stand for the Pledge of Allegiance.” And so, in the end, the teacher will probably gets suspended instead of this student. Things are upside down and inside out, just the way Marxists like it. 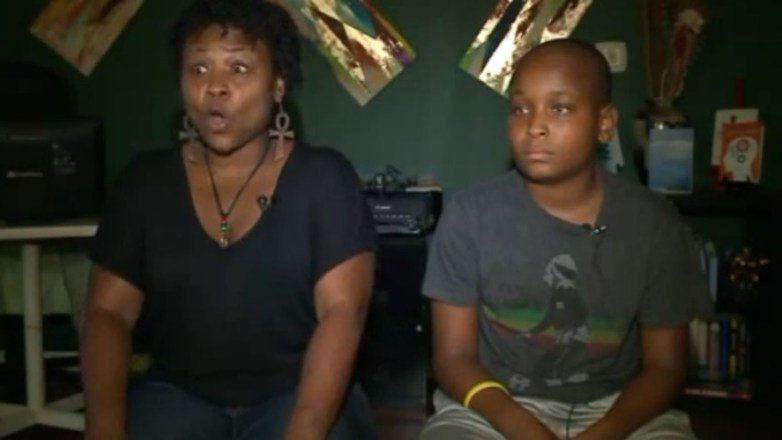