Welcome to the Hotel Mexifornia

On Wednesday, April 3, 2013, a group of women enjoying a “girl’s day out” noticed something amiss in Beverly Hills California.:  They noticed that the Beverly Hills Hotel was flying the Mexican flag: next to: the American flag. 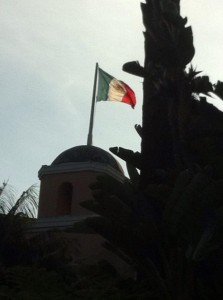 [1]They proceeded to enter the hotel and ask why a hotel located in Beverly Hills, CA was flying the flag of a foreign nation: alongside Old Glory.

Brandon (who did not give his last name) the front desk manager working in the hotel told them it had been raised to honor the heritage of Mexican farms that were located on the land before the hotel was built.

He then proceeded to tell them to “get used to it” and had security escort them from the building.

Apparently this is not the first time this issue has been raised with the hotel: http://immigrationbuzz.com/?p=2321[2]

Why were American Citizens escorted from the premises for asking that question?

Why were American Citizens told to “get used to” seeing the Mexican Flag fly above a hotel located within the United States of America?

Not only does the day manager’s explanation sound dubious, it does not jive with the history shown in the hotels own video: http://www.beverlyhillshotel.com/anniversary-video[3]

Anyone acquainted with American history knows that California has been part of the United States since the Mexican-American War (1846—1848) ended with the signing of the Treaty of Guadalupe Hidalgo which determined that the states of California, Arizona, Nevada, Colorado and Utah would became U.S. Territories, while the lower region of California, the Baja Peninsula, remained a part of Mexico.

America assumed a $3.25 million dollar debt and paid out $15 million more for California. Translated to today’s money, that $15 million comes to $376 billion.

Quite simply, this is part of the “progressive” assault upon America. This is happening while “progressives” within both major American political Parties attempt to devalue American Citizenship through “comprehensive immigration reform.”

Not only should American Citizens contact Congress and tell them granting American Citizenship to foreign nationals who broke the law to come and stay in America unwarranted, they should contact the Beverly Hills Hotel immediately and let them know that flying the flag of a foreign country within the United States of America is completely unacceptable.