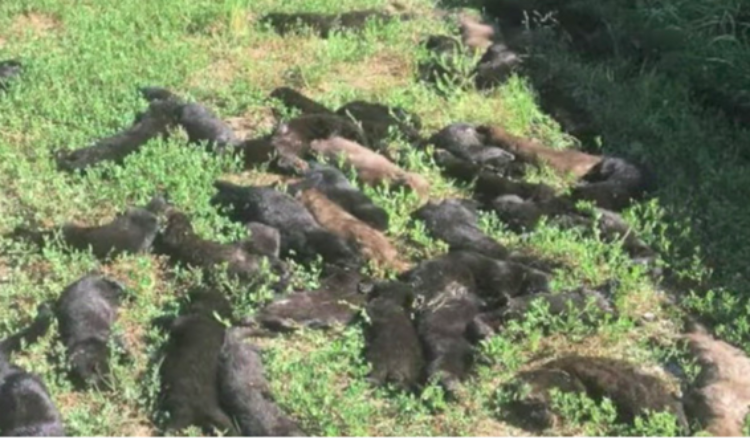 “If they actually cared about animals they wouldn’t release thousands of mink to die out in the heat,” said Sheriff Don Gudmundson.

A few days ago, at night, vandals posing as animal rights activists broke into the mink pens at Lang Farms near Eden Valley, Minnesota and released 38,000 of the animals into the wilderness. And now, after only a few days of fending for themselves, dead animals are being found by the thousands.

Anyone with even a bit of animal sense, even if all you’ve taken care of is a hamster, knows that you can’t release thousands of domesticated animals into the wild and expect things to turn out well. Growing up, my very indoorsy dog used to sneak out, but would be back in half an hour when he realized it was cold outside and wanted to be let back in to be fed.

As posted in The Washington Times[2]:

Dan Lang, owner of Lang Fur Farms, estimated that more than half of his animals are dead, he told the St. Cloud Times. He and a group of neighbors have spent hours rounding up the dead mink, and the live ones, he said, are now fighting among each other because they’ve been thrust into different groupings.

“We just threw mink in pens to try to get as many back as we could. And now they are killing each other,” he told the St. Cloud Times. “And they’re still dying. They are still dying from heat stress.”

The anti-fur activists are an odd group. They’re all relying on cold weather clothing developed in labs using products that come from oil and they live in places that people were only ever able to live because of the fur trade and the warmth of animal products. Furs can last for decades if you take care of them and there are a lot fewer byproducts involved than buying a $500 engineered jacket made from materials designed by people with degrees in chemistry.

The FBI is calling it an act of domestic terrorism and Lang says that the attack will cost him at least $750,000.

You can see the local story coverage here: