Caterina Simonsen has a rare genetic disease. : She is alive today because of new forms of treatment resulting from research, some of which involved experimenting on animals. : She recently thanked those researchers who have kept her alive:[1] 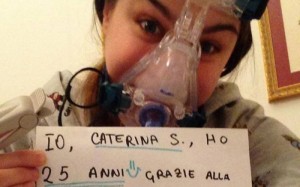 “I am 25 thanks to genuine research that includes experiments on animals. : Without research, I would have been dead at nine. You have gifted me a future.”

There are some who value human life over that of a rat. : Then there are these people:

“You could die tomorrow, I wouldn’t sacrifice my goldfish for you,”

“If you had died as a child, no one would have given a damn.”

“Is that the best you’ve got, Caterina? Have a good life then. I would prefer not to live if my life depended on the suffering of others or taking millions of lives, because their life is worth less than mine. : Shame!”

It’s easy for these people to say these things. : They’ve never been put in her position.

Personally, I would put baby bunnies in a running blender if it would save one of my children’s lives.

Emily Hulsey wonders if it’s just her or if people are getting crueler. I think so.