Hurricane Harvey has done an untold amount of damage to people and property, but we don’t often stop to think about the animals owners were forced to leave behind before they fled. I’m not talking about cats or dogs, I’m talking livestock and farm animals.

Lester Morrow, a teacher from Plum Grove, Texas, moved his animals to higher ground before he left, but couldn’t do much beyond that other than pray that they survived the storm. He filmed his return and what he caught on tape is arguably the most heart-warming thing you will ever see. 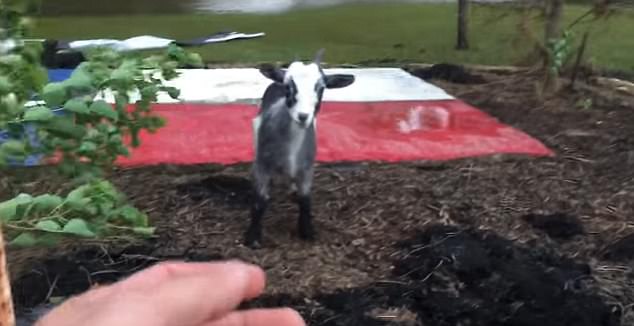 As the video begins, you can hear the man and his wife noting that a lot of the items they’ve found in their driveway upon returning don’t belong to them, including a truck and a set of stairs.

In the middle of his sentence, he stops suddenly and bursts into tears. “It’s Patty!” he says, zooming in on a black pig that heard the sound of his voice and came running.

He tells himself to “man up,” but immediately after spots his goat named “Meg,” the tears start all over again.

Walking up to his horses, he noticed immediately that one of them had a broken leg.

Unfortunately, not all of his animals made it and you can see he has several dead goats stuck in his fence.

He tries to call Meg, but she’s too frightened to come to him. That’s when he notices a donkey lying on the ground and he suspects that her legs are broken.

“My animals are my hobby and favorite pastime and because they all have their own unique personalities, I love them like my own children,” he said in a statement. “At the moment that I was forced to evacuate all I could do was move them to the highest ground possible, give a hug and kiss and say a prayer for my beloved animals.”

When all was said and done, 17 of his animals had perished during the storm, but Lester didn’t expect any of them to survive. That is why he was so shocked to see baby goats, a pregnant goat, the donkey, several horses and of course Patty, all alive and relatively healthy when he returned.

I am beyond happy that this man was able to reunite with his animals. If this doesn’t bring a tear to your eye, I have to question whether you actually have a heart.