If you’ve seen the show Hoarders, then you know the crew finds some very interesting items, filthy germs and even decaying bodies of animals in their homes. Hazmat found something that ranks on the top of the list of vile, inhumane and tortuous. Hazmat removed 276 barely alive dogs, covered in urine[1], fleas and fear from hoarders in New Jersey. The poor dogs, and people, were living in a rotting home in absolutely deplorable and unhealthy conditions. 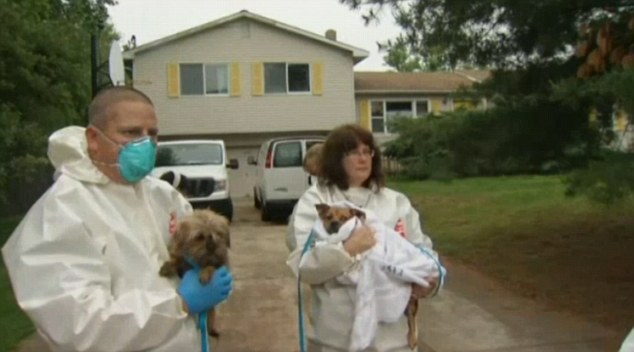 Rotting floors, flies and fleas permeated the New Jersey hoarder home where 276 dogs were rescued by workers in hazmat suits. Pugs, chihuahuas and Yorkshire terriers could be seen shaking in fear as they were exposed to the outside world for the first time in their lives. The dogs were found on the shelves, living under beds and even between the walls of the Charlene and Joseph Hendricks’ home in Howell.

The homeowners will likely be charged with various crimes involving animal endangerment.

The authorities only noticed this home due to a dog that had gotten loose at another time. That’s when they noticed a smell and investigated. Upon investigation, they found the dogs and hazmat had to step in to remove them.

Reports state that about 80 dogs were vaccinated on the spot.

If you’re going to have a dog, then have A dog. Why would anyone need 276 dogs and live in a smelly, dirty, rotten home in unsanitary conditions? What happened to these people to act this way and treat animals so badly? This is an absolutely terrible way to treat any living animal.

What are the chances that authorities will demolish the property? I didn’t know hoarders in New Jersey were keen on collecting live dogs.