Did I say ‘misguided’?[1] I meant ‘moronic’. My bad. Who does something this stupid? A couple of deluded liberals put a bison calf in the back of their SUV in Yellowstone Park. They were worried the little tyke was cold. I kid you not. The rangers there rescued the calf and gave the geniuses a ticket. They are lucky mommy didn’t ram their vehicle to get junior back. Much like moose, bison have rather poor eyesight and bad tempers. They don’t suffer human idiots well. The father and son thought the bison would freeze to death. That’s doubtful, but handling the calf could also cause its death if the mother decided to reject the calf after humans handled it. Wild animals sometimes do just that. You don’t screw around with mother nature in Yellowstone unless you have a death wish. Color me highly skeptical that these people are originally from Idaho. They would have known better. 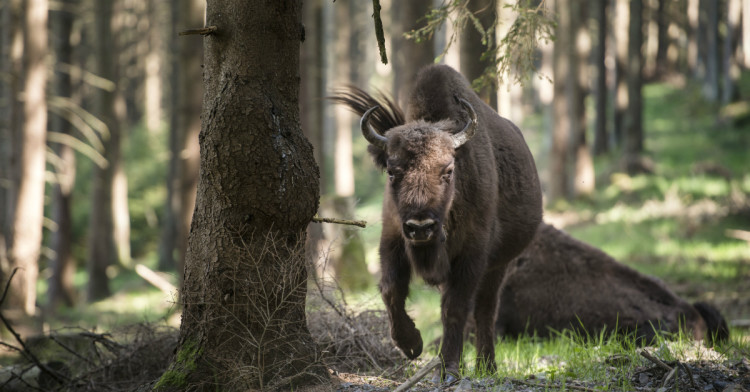 Rangers at Yellowstone National Park ticketed a pair of tourists Monday after they put a bison calf into their SUV and demanded to speak with a ranger, according to EastIdahoNews.com[3].

The pair, a father and son, believed the calf was in danger of freezing to death, a witness told the news website.

“They sincerely thought they were doing a service and helping that calf by trying to save it from the cold,” Rob Heusevelet told EastIdahoNews.com. Heusevelet spotted the pair while visiting the park with his child, who was on a field trip with a group of fifth-graders from Idaho.

Rangers followed the tourists back to where they found the bison and released the animal, according to EastIdahoNews.com. 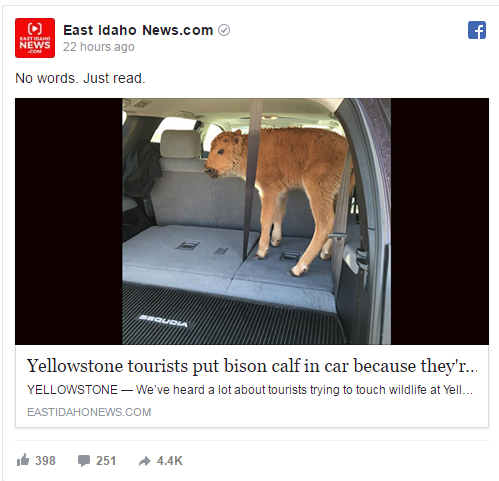 I’ve been to the park hundreds of times. There are very good reasons you don’t feed the bears or cuddle with bison. Most humans have enough sense to figure out what those reasons are. Visitors are not allowed to get near animals at Yellowstone. According to the National Park Service, visitors are required to stay at least 25 yards away from bison and other large animals. “Every year, visitors are gored and some have been killed,” the Parks Service warned. “Bison can sprint three times faster than humans can run. They are unpredictable and dangerous.” This is the kind of behavior you get with touchy-feely liberals. And every once in a while, one of them gets killed because of it. A baby bison is not a plush toy and this is not Xanadu.