Cultural Marxists frequently resort to hate hoaxes to advance their fraudulent narrative that favored groups (blacks, Muslims, sexual deviants) are actually oppressed. The tactic must be regarded as successful, because other moonbats are adopting it — namely the militant kooks at PETA:

The animal-rights group has produced a disturbing new video that depicts a cat suffering at the hands of its owner. It’s difficult to watch. It’s also completely fake.

But it looks real; it is a skilled CGI work clearly meant to deceive viewers. Now, PETA is trying to enlist complicit media organizations to knowingly publish the fake video in an effort to make the lie go viral. …

In the clip, a man demands that his cat do tricks. The animal is computer-generated, though it’s pretty convincing. He commands it to sit on its hind legs and jump between stools. When it fails, he slaps it across the face multiple times. The cat eventually runs away in fear. …

The agency that created the video for PETA planned on anonymously releasing the footage early next week via YouTube and said it wants media outlets to cover the video without mentioning that it’s fake. …

Through this marketing effort, PETA is trying to convince the media to report and share a fake video as if it’s real, in hopes of deceiving the public to create manufactured outrage.

Deceiving the public to create manufactured outrage is what PETA is all about. You might even say, that’s what moonbattery is all about.

The appalling video was largely pointless, in that its stated intent was to hurt “circuses that use lions, tigers, or any other live animals.” The Greatest Show on Earth is already dead, thanks in large part to PETA’s efforts.

You have to hand it to these whacky frauds; the CGI is realistic: 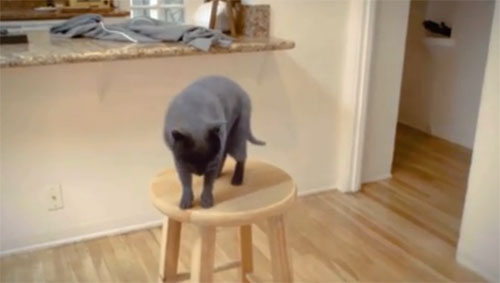 Let’s hope CNN doesn’t get ahold of this technology.

On tips from Bodhisattva and rpp618. Cross-posted at Moonbattery.