PETA continues to prove that it is an organization comprised of utter lunatics. Now they’re demanding that Pennsylvania puts up a grave marker to memorialize a bunch of pigs. 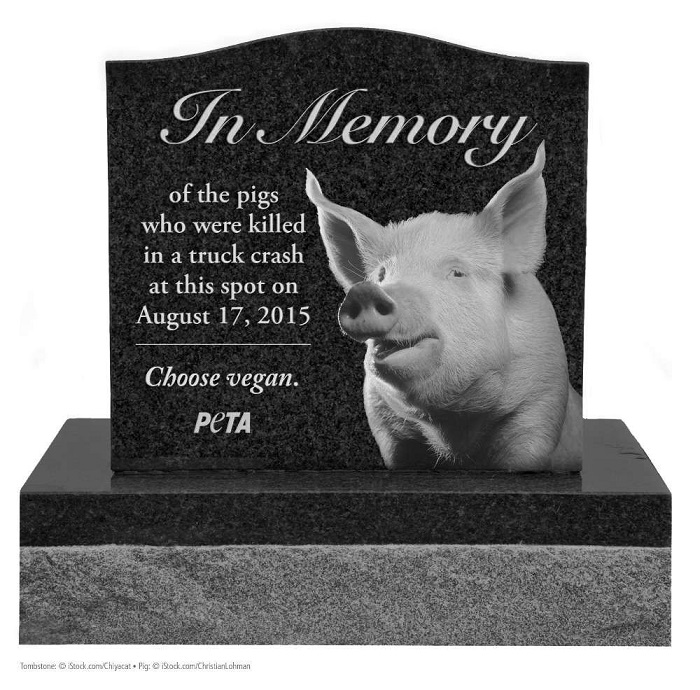 On August 17, a tractor-trailer hauling pigs overturned on Route 30 in Lancaster, Pennsylvania, killing several pigs. Now animal rights group PETA is demanding that state officials erect a grave marker to memorialize the lives of the pigs at the site of the crash.

The truck was reportedly carrying some 80 pigs to market but several were euthanized because of the accident.

Animal rights group People For The Ethical Treatment of Animals (PETA) is demanding that the state of Pennsylvania “erect a 5-foot tombstone” on the side of the highway next to the site where the accident occurred.

The PETA press release said that Pennsylvania has a responsibility to push the PETA ideology. The group said the state must memorialize the “terrified animals” that died in the crash in order to “give motorists food for thought by calling on caring people to spare pigs the terrifying journey to slaughter by going vegan.”

“This memorial is intended to remind tractor-trailer drivers of their responsibility to the thousands of animals they carry to their deaths every year,” says PETA Executive Vice President Tracy Reiman. “PETA hopes to encourage motorists to help make roads safer for everyone by choosing healthy vegan foods and eliminating this dangerous and frightening trip entirely.”

Here’s a question: when will PETA bother itself with memorials to humans killed in highway crashes? But then, PETA believes that animals are more valuable than people, don’t they?