Moonbats fail again – A chimpanzee is not entitled to the same rights as people and does not have be freed from captivity by its owner, a US court has ruled. The appeals court in New York State said caged chimpanzee Tommy could not be recognised as a “legal person” as it “cannot bear any legal duties[1]“. 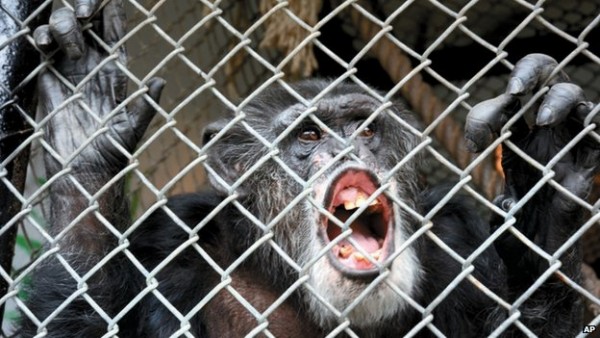 The Nonhuman Rights Project had argued that chimps who had such similar characteristics to the humans deserved basic rights, including freedom. The rights group said it would appeal.

In its ruling, the judges wrote: “So far as legal theory is concerned, a person is any being whom the law regards as capable of rights and duties.

“Needless to say, unlike human beings, chimpanzees cannot bear any legal duties, submit to societal responsibilities or be held legally accountable for their actions.’

The court added that there was no precedent for treating animals as persons and no legal basis.

In October, the Nonhuman Rights Project had argued that chimpanzees should be recognised as “legal persons” and therefore be given the right to liberty.

Tommy’s owner, Patrick Lavery, said he was pleased with the outcome, according to the Associated Press.

Tommy – who is believed to be about 40 years old – is a former entertainment chimp. He was given to Mr. Lavery about 10 years ago.

Nice try, but a monkey is a monkey and a human is a human. I’m not sure I would want ‘Tommy’ cashing me out at McDonalds when he was on his own supporting himself. Maybe now the court systems can focus on real cases and not these frivolous ones.