There is a special place in Hell for those who abuse pets. This wonderful pup[1] has a new lease on life after almost dying at the hands of his abuser. Read on for details and scroll down for video of Roo. 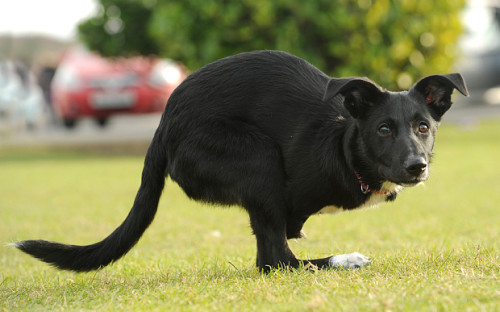 Despite being viciously attacked with a spade and left to die Roo the dog has not been held back, even without his front legs.

The canine has made a remarkable transformation after they had to be amputated, learning to hop along on his back legs just like a kangaroo as shown in a heartwarming video.

The two-year-old animal was beaten so badly his legs were almost severed off before he was abandoned next to a railway track in Romania.

Now his loving new owners from Sandown on the Isle of Wight have ordered a specialised wheel cart for him to roll around on following a fundraising campaign.

They adopted him after he was rescued and taken into the care of an animal charity, before reaching a foster home in the UK.

But this has made the dog very flexible despite being left on the rail-tracks for three days.

Joanne added: ‘We can only speculate as to what happened before then, but we have built up a picture based on how he reacts to certain things.

‘He is very nervous of men, so I think a man might have been responsible.’

Yet Roo happily plays along with the couple’s other dogs and Joanne said ‘I think he is better off here with us with two legs than where he was in Romania with four’.

His new custom-made wheel cart will now act as his front legs. The £460 device was funded by a charity drive on the Go Fund Me website.

The page raised over £1000 in less than two weeks and fans are now following Roo’s progress on a dedicated Facebook paged called ‘Wheels4Roo’.

It is so good to see him happy and playing after what must have been a nightmare for him. Thank goodness for good people like Roo’s new owners. We’ll never regret the love and care we show other people or animals. Love truly brings life.