I may not be crazy about[1] Scaramucci’s personal political stances… he supports gun control, believes in climate change, is pro-choice, etc. etc… but, I like this a lot. He got on Face the Nation today and basically said he would hold a staff meeting tomorrow and tell everyone that if the leaks don’t stop, he’ll fire everybody. It’s about freaking time. Me likey.

Scaramucci is right…[2] they are only as strong as their weakest link and the leaks must stop if they are to get anything tangible done at all. It’s been an ongoing hassle from the beginning. If the Trump administration had fired everyone and cleaned house on the way in, this would not be happening. It’s long, long overdue. Yes, it’s dramatic, but it’s appropriate. He went on: “I’m not going to be able to stop the leaks in the intergovernmental agencies and all that other stuff — that’s a whole different ball of wax — but something is going on in the White House that the president does not like, and we’re going to fix it.” Good for him and a great way to start. 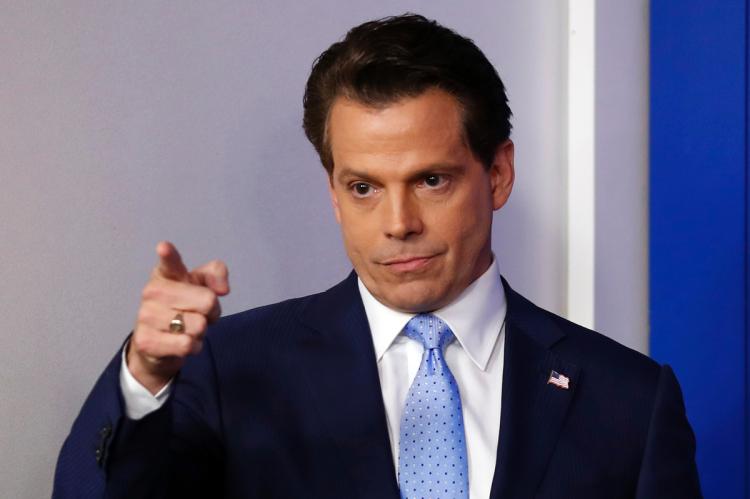 Sunday on CBS’s “Face the Nation,” White House communications director Anthony Scaramucci said he would fire his entire staff if leaks to the press from communications staffers continue.

Scaramucci said, “[U]nfortunately, he may have had a conversation in the Oval Office or somewhere about it, and then people rush out to leak that information to people. It’s very unprofessional and harmful.”

He added, “They will get fired. Tomorrow I’ll have a staff meeting, and it will be very — I’m not going to make any prejudgments about anybody on that staff, if stay, they’re going to stop leaking. If the leaks continue, we are strong is our weakest link and I’ll say it differently in a pun where a strong as our weakest leak. If you guys want to keep leaking, get together and make a decision as a team that you’re going to stop leaking. If you’re going to keep leaking, I’m going to fire everybody.”

Scaramucci also told CNN’s Jake Tapper that the whole Russian dust up was just nonsense. While appearing on CNN’s “State of the Union,” Scaramucci denounced Donald Trump Jr.’s meeting with a Russian attorney as a “non-event” and easily handled Tapper’s questions. He’s a professional, you’ve got to say that for the guy.

He said he’s not sure that he would have taken the meeting that Donald Trump Jr. took. Good, because that was a naive mistake. He also said that there’s nothing there and so far, he’s right. Scaramucci bluntly stated that the media wants to “make that a two week, a four-week news cycle.” So far, they’ve been successful with that, but it looks like that’s about to come to a screeching halt. Again, that’s good news. He said the meeting had virtually no impact on the campaign.

As I said, this guy has a liberal history, but he is all business now and his duty is to protect Trump and his administration. Looks like Scaramucci is a pit bull with teeth – he’s a street fighter. Just what is needed right now, but I’ll be keeping an eye on his liberal ways.

Watching #Scaramucci[14] spar with @jaketapper[15] is truly amazing. I can see why this guy got hired. Stick with it Tapper! #CNNSOTU[9]