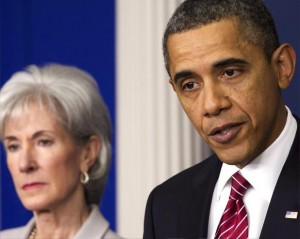 [1] In a letter drafted by West Virginia Attorney General Patrick Morrisey, the law enforcement officers condemned President Obama’s use of executive order “fixes” for the law, telling Sebelius that the “illegal actions by this administration must stop,” according toThe Hill.

“We support allowing citizens to keep their health insurance coverage, but the only way to fix this problem-ridden law is to enact changes lawfully: through Congressional action,” the letter stated, calling the order “flatly illegal under federal constitutional and statutory law.”

Republicans have often criticized the administration for making changes to the law after the fact. Other switches included the decision to delay the employer insurance mandate for a year, something many lawmakers said should have required a congressional vote.

The officers also slammed Health and Human Services for continuing to “ignore the widespread public outcry over the security of consumers’ private information on exchanges” and expressed concern over the administration’s decision to “not propose and implement rigorous privacy standards for outreach personnel.”

One of the letter’s signatories, Gregg Abbott of Texas – who’s running for governor this year – appeared “On the Record” with Fox News host Greta van Susteren Thursday night. Watch their exchange here: