Much to the dismay of the Washington Post’s Dana Milbank, there are more than a few Republicans in the House talking about impeachment.[1] 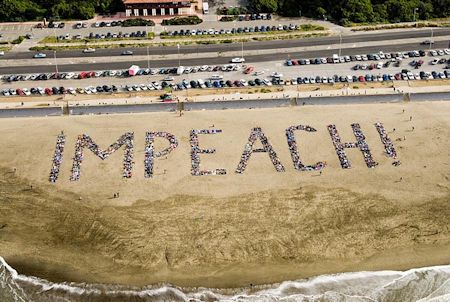 History will record that on Tuesday, Dec. 3, 2013, the U.S. House of Representatives Committee on the Judiciary met to consider the impeachment of Barack Hussein Obama.

…It is, Rep. Steve King (R-Iowa) said from the dais, “the word that we don’t like to say in this committee, and I’m not about to utter here in this particular hearing.”

One of the majority’s witnesses, Georgetown law professor Nicholas Rosenkranz, encouraged the Republicans not to be so shy. “I don’t think you should be hesitant to speak the word in this room,” he said. “A check on executive lawlessness is impeachment.”

This gave the lawmakers courage. “I’m often asked this,” said Rep. Doug Collins (R-Ga.) “You got to go up there, and you just impeach him.”

Rep. Blake Farenthold (R-Tex.), who has said there are enough votes in the House to impeach Obama, added: “We’ve also talked about the I-word, impeachment, which I don’t think would get past the Senate in the current climate. .?.?. Is there anything else we can do?”

…The Republicans in the House know there is no chance of throwing this president from office. Yet at least 13 of the 22 Republicans on the panel have threatened or hinted at impeachment of Obama, his appointees or his allies in Congress. They’ve proposed this as the remedy to just about every dispute or political disagreement, from Syria to Obamacare.

Rep. Trey Radel (R-Fla.), before his cocaine arrest and guilty plea, invoked the prospect of impeaching Obama over gun policy. Rep. Duncan Hunter (R-Calif.) raised the specter of impeachment over Obama’s threat to bomb Syria without congressional approval. Rep. Kerry Bentivolio (R-Mich.) said it would be his “dream come true” to write the Articles of Impeachment, and Rep. Bill Flores (R-Tex.) said that if “the House had an impeachment vote it would probably impeach the president.”

Sen. Jim Inhofe said Obama could be impeached over the attack on Americans in Benghazi, Libya, while fellow Oklahoma Republican Sen. Tom Coburn said in August that Obama was “getting perilously close” to meeting the standard for impeachment (though he called Obama a “personal friend”). Sen. Tim Scott (R-S.C.) thought it would have been an impeachable offense if Obama unilaterally raised the debt ceiling. Sen. Ted Cruz (R-Tex.) branded Obama “lawless.”

At Tuesday’s hearing, the committee chairman, Bob Goodlatte (R-Va.), accused Obama of “picking and choosing which laws to enforce” and of being “the first president since Richard Nixon to ignore a duly enacted law simply because he disagrees with it.”

Contributed Smith: “The president has ignored laws, failed to enforce laws, undermined laws and changed laws, all contrary to the Constitution.”

Barack Obama deserves to be impeached. Will it happen? Not as long as Democrats control the Senate. However, it’s entirely possible that the GOP could take the Senate back in 2014. If we get to that point, what happens will depend on Republicans like Mitch McConnell, John McCain and Kelly Ayotte who have spines of Jello when it comes to taking on the Democrats. That’s not an ideal situation, but at long last, we’d at least genuinely have the real option of putting impeachment on the table.