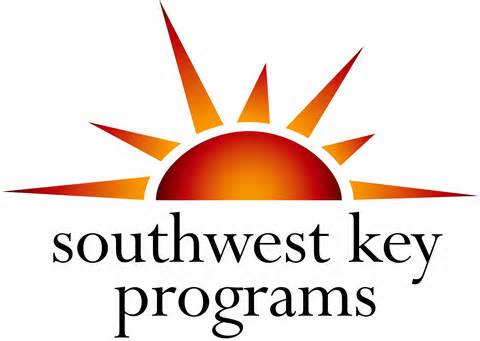 Are you curious who has been facilitating the transport of illegal alien children throughout the country? Look no more… meet La Raza[3] connected Southwest Key Programs[4]. This organization is the pipeline for the children into US refugee camps and homes across the nation. They provide immigrant youth shelters. It is a well-oiled machine that was set up to educate and reintegrate youth into American society. They also provide training for jobs. And baby, they are hiring.

Southwest Key Programs is funded by government and state programs. Here is an overview of what they do[5]:

Southwest Key Programs is a national nonprofit organization providing transformative education, innovative safe shelters and alternatives to incarceration for over 200,000 youth and their families annually, while creating opportunities for their families to become self-sufficient. The inspiring youth and parents we work with are seeking the American dream: equality, education, and a higher quality of life. At Southwest Key, we simply open the doors to opportunity so they can achieve these dreams.

Southwest Key Programs ranks 5th among the Top Hispanic Nonprofits in America[6], employing a creative and diverse staff of over 2,200 employees. Because of Southwest Key’s work, thousands of youth have been diverted from prisons, jails, and institutions, enabling them to stay at home with their families and out of trouble. Southwest Key has reunified thousands of immigrant children with their families and provided these unaccompanied minors with 24-hour care and education. Southwest Key is one of only three nonprofits in Austin to be accredited by the Council on Accreditation, the nation’s leading human service accrediting body.

From the start, a cornerstone of all of our programs has been culturally-relevant education. Since 1999 we have refined our model by operating leading alternative schools throughout Texas, preventing hundreds of youth from dropping out of school by providing them with individualized education in a therapeutic setting. In 2009, East Austin College Prep[7] opened at Southwest Key’s El Centro de Familia campus.

Over $8 million went into building their facility for this. This business was founded in 1987 and was made-to-order for Obama’s manufactured chaos on the border. Fast facts on Southwest Key Programs:

Their specialty is reunifying illegal minors with their families. They are the underground railroad for the American invasion from the South. They are nationalistic in their connections and leadership. Heavily connected to the La Raza Roundtable[8], don’t be fooled by the charitable facade. This is a radical breeding ground. They are militant, Latino community organizers.

Here are their Board of Directors:

The Leadership of Southwest Key Programs:

They are connected to the Office of Refugee Resettlement[10]:

“Following the Office of Refugee Resettlement (ORR) mission, which is founded on the belief that new arriving populations have inherent capabilities when given opportunities, ORR/ Division of Children Services/Unaccompanied Alien Children program provides unaccompanied alien children (UAC) with a safe and appropriate environment as well as client-focused highest quality of care to maximize the UAC’s opportunities for success both while in care, and upon discharge from the program to sponsors in the U.S. or return to home country, to assist them in becoming integrated members of our GLOBAL SOCIETY.”

It is to laugh. If their intent was the highest quality of care and safety, they have failed already and spectacularly. Their real goal is the GLOBAL SOCIETY.

As an aside, here is a map[11] where illegal alien children are currently being housed. Thank you Weasel Zippers. I would imagine that Southwest Key Programs will transport children from these facilities to put them either with their families that are here legally or illegally, or house them in homes until their family is brought over. We are talking 10’s of millions being brought in and this organization will not only facilitate an invasion force, they will get wealthy doing it from government and state funds. I understand that Texas alone has given them over $150,000 in state monies.

For example, they are creating jobs for housing illegal immigrants. In Tucson alone[12] there are 200 openings for jobs to assist with the sheltering of illegal immigrant children. This organization is taking old nursing homes and other buildings and converting them to house thousands of children. They make no mention of medical care or gangs – just shelter, safety and culture – their culture, not America’s.

There is massive push back on this as well. In Escondido, CA[13], the residents rejected these shelters wholeheartedly. As Daniel Greenfield of Sultan Knish rightly states, “This is what revolution looks like[14].” 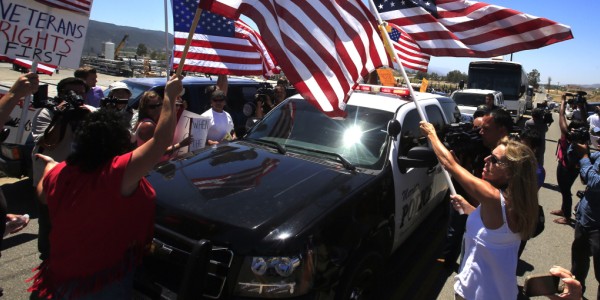 Protesters in Murrieta, California, blocking and turning away buses of illegal immigrants[15]

Murrieta, CA is not just pushing back, they’re telling the feds to shove it:

Waving Americans flags and protest signs, the crowd refused to give way when the buses arrived with some 140 detainees from Texas, which has seen a flood of Central American illegal aliens cross the border.

They turned buses back[16] and they will be the first of many communities to do so. There are militias from California and Texas joining forces to turn illegals back. There has been talk of calling the National Guard out to the border in Arizona and Texas. The border is in meltdown.

The Murrieta protest strongly reminded me of what the Tea Party used to do when it came to ObamaCare. A small number of ordinary people used social media to get the word out and organize protests.

The situation is similar to, but also worse than ObamaCare, because there is no establishment opposition at all. The only real opposition is coming from ordinary people who are fed up.

Sultan Knish absolutely nails it – we are fed up.

Obama is also fundraising with a racist Mexican Director[18] who actively promoted the murder of opponents of illegal immigration. Nifty, huh? But Obama couldn’t be bothered to actually go to the US/Mexican border. He would never sully himself with the masses. He has Communist minions for that, don’t ya know.

So, while Southwest Key Programs claims to be ‘for the children,’ remember what is really going on here. The redistribution of wealth, the invasion and eradication of America’s borders and the destruction of our Republic. It’s community organizing from hell and is spurring a revolt. Remember, it’s not fascism[19] when they do it[20]. Southwest Key Programs is ACORN for illegal aliens and they are the handmaidens of Obama’s ‘transformation’ of America.

Video Reveals Thousands of Illegal Immigrants Arriving At Border, Getting Free Bus Tickets Into US[21]