Ann Coulter: Obama Would Be Impeached If He Weren’t America’s First Black President 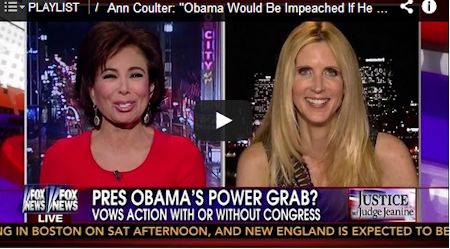 His only legislative power comes from “his veto pen,” she said, but “he’s vetoing legislation by refusing to enforce it.”

“This is the bottom of the slippery slope,” Coulter said. “And I think he would be impeached if he weren’t America’s first black president.”

It’s not the number of executive orders that troubles Coulter, it’s that he’s abusing his power. The orders are designed to supplement existing law, not change or create new laws.