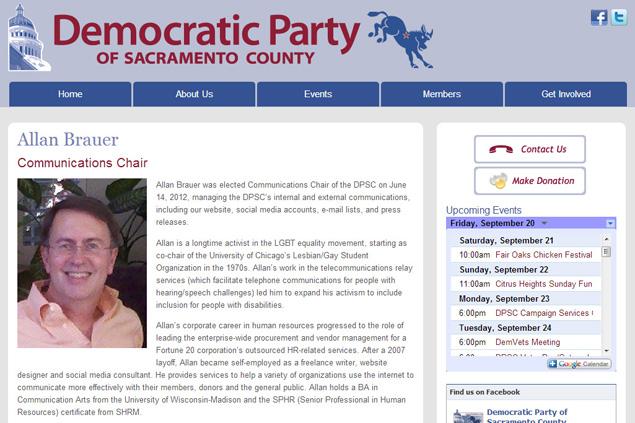 Allan Brauer, the Communications Chair of the Democratic Party of Sacramento County[3], spouted death threats at the children of Ted Cruz’s speechwriter today all over defunding Obamacare. Brauer is the scum of the earth… he’s just plain evil. But I suppose, it is just another perk of being Progressive. Apology not accepted by the way – at least by Americans in general. Brauer has apologized to Amanda Carpenter on Twitter where this all started – no amount of crawling will make up for what he said though.

Ladies and Gents, I give you the elegance and grace of Mr. Allan Brauer:

And it just keeps getting better: 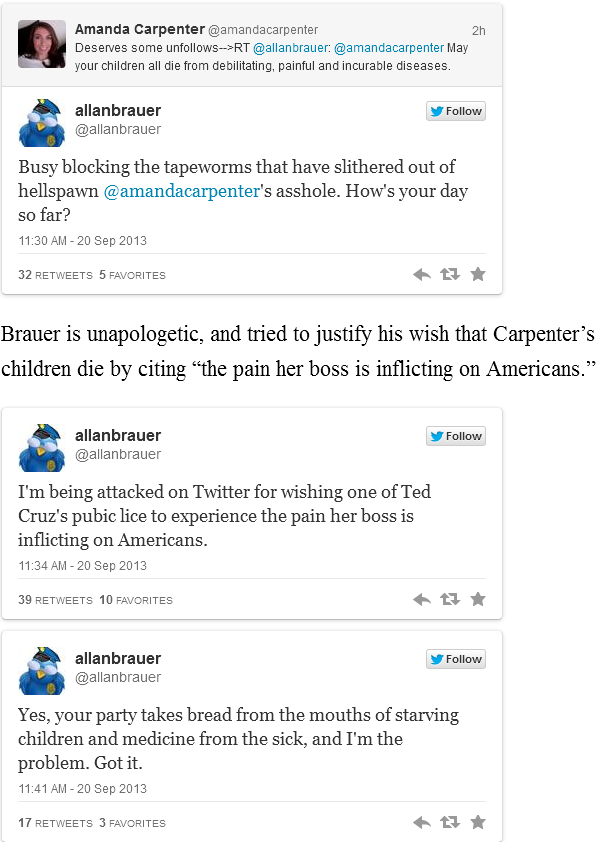 Then the faux apology (because you know he meant what he originally said and then tried to walk it back):

But does the California Democratic Party reprimand Brauer? Not so much… Tenoch Flores, Spokesman for the California Democratic Party, told Chris Moody of Yahoo! News that this type of rhetoric “lets fringe characters” like Ted Cruz “off the hook” and that it was “never acceptable to wish physical harm against political opponents, regardless of how objectionable their policy priorities are.” So, in other words, it’s not okay to sling death threats at people and their children, not even against those we hate (and boy, do they hate us) — you know, like Ted Cruz and the Tea Party. These people are disgusting.

Keeping it classy in California[4], where commies and Progressives rule the roost and moral Constitutionalists are demonized and hunted. Another evil Progressive asshat gets away with death threats. But if it had been a conservative, every alphabet agency in the country would have been on their doorstep. Progessives would actually carry out their threats if they thought they could get away with it. Under Obama, who knows… that may be sooner than you think.

The Texas Republican is calling on his colleagues to oppose limiting debate on it, warning against what he calls procedural trickery.

“Step two is the Senate, where all accounts suggest Harry Reid plans to use procedural gimmicks to try to add funding back in for Obamacare,” Cruz said. “If Reid pursues this plan – if he insists on using a 50-vote threshold to fund Obamacare with a partisan vote of only Democrats – then I hope that every Senate Republican will stand together and oppose cloture on the bill in order to keep the House bill intact and not let Harry Reid add Obamacare funding back in.”

By asking Republicans to oppose any motion to invoke cloture, and thus limit debate, on the stopgap spending bill passed Friday by the Republican-led House[7] – the one that does defund the health care overhaul – Cruz and Hoskins are literally calling for Republicans to filibuster the bill and, possibly, shut down the government in the process.

“It’s time for Mitch McConnell to show some leadership and deliver the 41 votes needed to defeat cloture on Harry Reid’s plan to fund Obamacare,” Hoskins said. “Republicans like to say they are against Obamacare, but now is the time to prove it. Now is when it matters.”

Of course, if GOP senators actually follow Cruz and Hoskins’ advice, they will, in effect, be voting against a bill that includes Obamacare defunding. The vote to strike that language is not expected until after cloture is invoked, and it will take only 51 votes to succeed. That’s why Cruz may ultimately be proved correct when he says Democrats have the votes to send the measure back to the House[8], without Obamacare funding.

So as the Dems get their hate on again, Cruz leads the charge against Obamacare. I smell a Presidential candidate in the making and he drinks tea.

Update: The Democratic Party of Sacramento County asked for and received the resignation of Allan Brauer.