I’ve never watched Parts Unknown…[1] I hear it is pretty good. I try to distance myself from shows I like and my politics as much as I can. Even at that, many shows I have just written off because they are too political, too immoral and too condescending. Anthony Bourdain, the infamous chef and celebrity of Parts Unknown, seems to have something sorely lacking in most celebrities… common sense. In fact, he trout smacked privileged Eastern liberals all over the place concerning the election of Donald Trump.

Bourdain is no fan of Donald Trump. In fact, he despises him. But he is even more disgusted with the elitist left. They treated middle America like dirt… pigeon holing them as stupid, illiterate, uncultured rubes. And that right there led to the election of Trump. Bourdain knows it and isn’t afraid to say it. Good for him. I admire that. I just wish he hadn’t had Barack Obama on his show. Ewwww. That’s an appetite killer if there ever was one. 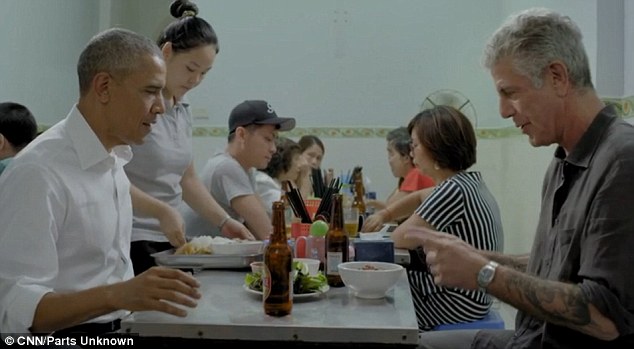 Anthony Bourdain says East Coast liberals like himself are the reason why Donald Trump got elected.

In a new interview with Reason[3], the famous chef, author and host of CNN’s Parts Unknown eviscerated the left for their condescension of working-class America.

‘The utter contempt with which privileged Eastern liberals such as myself discuss red-state, gun-country, working-class America as ridiculous and morons and rubes is largely responsible for the up swell of rage and contempt and desire to pull down the temple that we’re seeing now,’ Bourdain said.

Having spent a lot of time in flyover country, Bourdain said blue-collar Americans aren’t all that different from Democrats concentrated in major cities.

Instead of picking apart issues we disagree on, Bourdain said we should be looking for common ground.

‘I’ve spent a lot of time in gun-country, God-fearing America. There are a hell of a lot of nice people out there, who are doing what everyone else in this world is trying to do: the best they can to get by, and take care of themselves and the people they love.

‘When we deny them their basic humanity and legitimacy of their views, however different they may be than ours, when we mock them at every turn, and treat them with contempt, we do no one any good.

Bourdain recognizes there are a lot of very good people out there in mainstream America that are conservatives who voted for Trump because they can’t stomach the left. It would be nice to find common ground as he suggests, but the political parties have become so polarized and are so far apart in viewpoint, I don’t think that is going to be possible ever again. But at least this guy gets it.

“Nothing nauseates me more than preaching to the converted. The self-congratulatory tone of the privileged left – just repeating and repeating and repeating the outrages of the opposition – this does not win hearts and minds. It doesn’t change anyone’s opinions. It only solidifies them, and makes things worse for all of us. We should be breaking bread with each other, and finding common ground whenever possible. I fear that is not at all what we’ve done,” Bourdain said.

As Bourdain points out, this is a global trend of populism. It’s as if the masses worldwide have had it with elitists and politicians. Hell hath no fury like the common man screwed. Parts Unknown is a show in which Bourdain travels the world to explore lesser-known places and cuisines. He should try middle America and dive into the conservative pool… I think Bourdain might find the water is just fine. 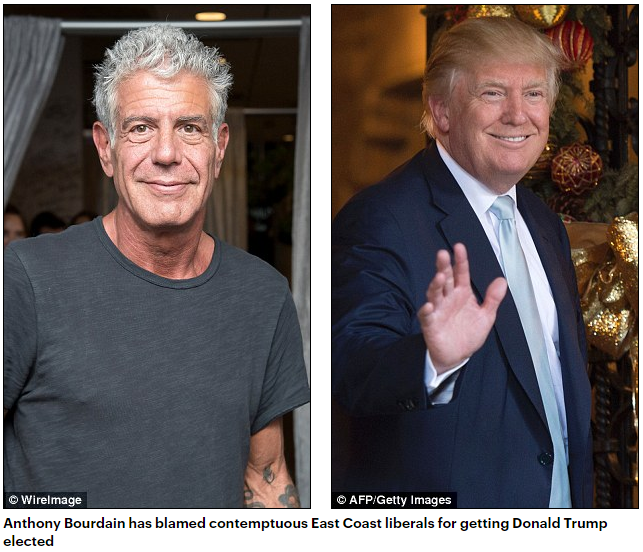