Condi Rice released a statement this week that got her some pretty major attention, she was headlining. She said that we shouldn’t be trying to remove confederate monuments across the country just because there are some people that feel uncomfortable about them. 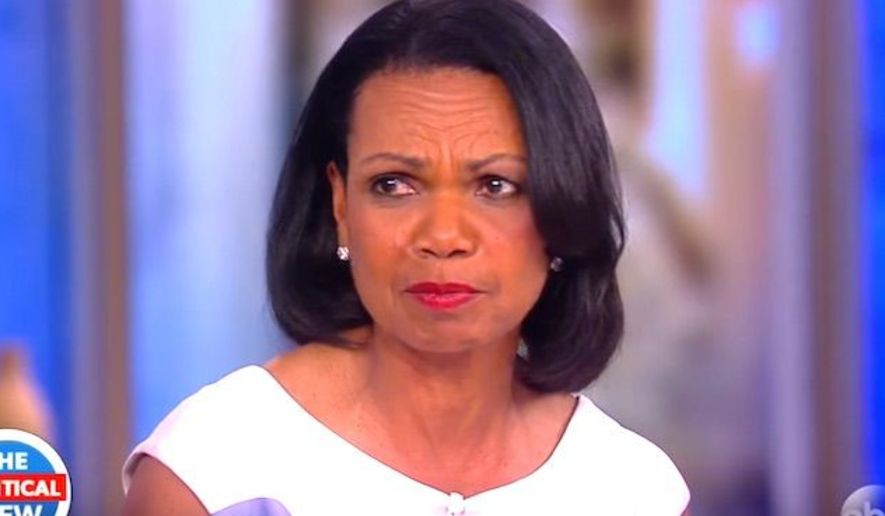 Which makes complete sense right? It would seem that this is a topic that shouldn’t even require a discussion about it and yet post-Obama’s America here we are, talking about it.

History is important, she got that absolutely right![2]

She hit that same chord of truth when she was a guest on ‘The View’ recently during a conversation that she was having with the liberal and very obnoxious hosts of the show.

Right from the beginning, they were on her and in an obvious attempt to corner her, she pulled the rug right out from under them. These silly day show hosts must not have gotten the memo on Rice. She has more common sense in a toe nail than they could possibly ever hope for combined.

You’ve got to see this, watch how it all went down when Sunny Hostin had the audacity to pretend that Putin is at fault for Hillary’s loss. It’s sick…

HOSTIN: But Madam Secretary, if he indeed did engage in these types of tactics in our election, then the very legitimacy of our election is at issue, isn’t it?

Rice doesn’t hesitate, stutter, or fumble over one single word of her response and she shoots that narrative down like a BOSS!

RICE: No, no. That’s where I — first of all, I don’t want to question his motives beyond he’s an eye for an eye kind of person. Secondly, I trust the people who voted in Wisconsin and Texas and Alabama and California to have voted on the basis of who they thought was best going to represent their interests. And so I’m not going to question the legitimacy of their vote because Vladimir Putin tried to interfere in the elections. That’s just a step that I don’t think we should take. Let’s trust our fellow citizens to have been smart enough to have voted for the people they thought they ought to be voting for.

The View in particular has been pushing the delegitimized election narrative hard since Trump won. In December, the hosts even tried to get Trump out of office, excitedly sharing their theory before his inauguration, using this as their primary reason for his ineligibility.

Seriously though, what were they thinking going up against Condi Rice like that? It was a suicide mission.

Rice used the truth to shut them down and that’s the BEST way to do such a thing. She’s right too, even if Putin was behind WikiLeaks (which is not true), all he really did was expose things that Hillary ACTUALLY did that she shouldn’t have.

So, in the end, no matter WHO spilled the beans and exposed Hillary…it is HER fault that there is anything to be exposed about her in the first place! So, why is it even a ‘thing’ with the left? IDIOTS!