From Bad to Worse – Look at What Was Just Discovered… [VIDEO]

I know you will all be[1] so surprised to find out that Susan Rice is now lying her freaking head off. She is denying that she prepared spreadsheets of surveilled telephone calls by Trump and his aides. However, U.S. Attorney Joe DiGenova said that her denial “would come as quite a surprise to the government officials who have reviewed dozens of those spreadsheets.” That spells out the lie for you right there. Too many people received the spreadsheets for her to skate on this one… if convicted of disseminating information that should have remained masked, each count is worth ten years as it is a felony.

Absolutely no illegal activity was found connected to President Trump or his people. This was purely political in nature and highly unethical. I still contend that Rice was ordered to do this by President Barack Obama or Valerie Jarrett. Other official sources with direct knowledge and who requested anonymity confirmed to TheDCNF diGenova’s description of surveillance reports Rice ordered one year before the 2016 presidential election. I doubt Rice or the Democrats can talk themselves out of this one. The National Security Council has logs of of every time she looked at the information. 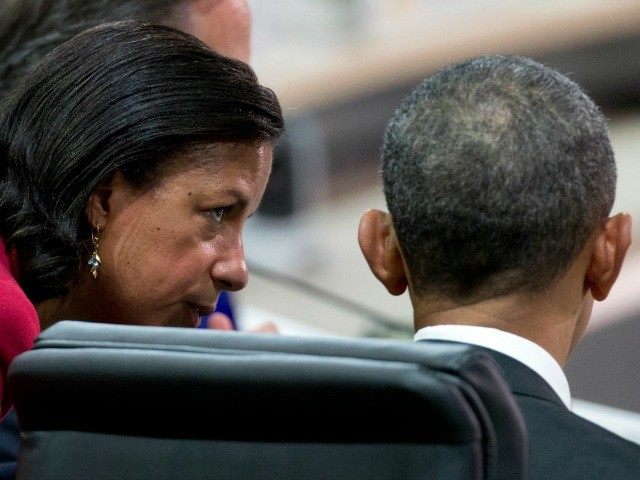 In addition, former U.S. Attorney Joe DiGenova, one of TheDCNF’s sources, said Tuesday in response to Rice that her denial “would come as quite a surprise to the government officials who have reviewed dozens of those spreadsheets.”

“What was produced by the intelligence community at the request of Ms. Rice were detailed spreadsheets of intercepted phone calls with unmasked Trump associates in perfectly legal conversations with individuals,” diGenova told The Daily Caller News Foundation Investigative Group Monday.

“The overheard conversations involved no illegal activity by anybody of the Trump associates, or anyone they were speaking with,” diGenova said. “In short, the only apparent illegal activity was the unmasking of the people in the calls.”

While Rice is denying everything, other Democrats are trying to justify her actions as ‘normal’. She didn’t have a warrant, she just did this figuring she would never be caught or held accountable. Michael Doran, former NSC senior director, said there “was a stream of information that was supposed to be hermetically sealed from politics,” but that somehow the Obama administration “found a way to blow a hole in that wall.” The Daily Caller pointed out that Doran charged that potential serious crimes were undertaken because “this is a leaking of signal intelligence. That’s a felony,” he told TheDCNF. “And you can get 10 years for that. It is a tremendous abuse of the system. We’re not supposed to be monitoring American citizens. Bigger than the crime, is the breach of public trust.”

Cue the smoking gun… Col. (Ret.) James Waurishuk, who is an NSC veteran and former deputy director for intelligence at the U.S. Central Command
said he was most dismayed that “this is now using national intelligence assets and capabilities to spy on the elected, yet-to-be-seated president. We’re looking at a potential constitutional crisis from the standpoint that we used an extremely strong capability that’s supposed to be used to safeguard and protect the country,” he said. “And we used it for political purposes by a sitting president. That takes on a new precedent.” You betcha it does. The media is already telling[4] everyone to ignore this. I don’t think so.