Soon to be former President Barack Obama[1] had the temerity to admit on 60 Minutes that it was his call to abstain at the UN on a vote condemning Israeli settlements… making it crystal clear that he was the one behind betraying Israel. Then he made the evilly laughable statement that the move did not hurt relations between our two countries. Bibi Netanyahu and all of Israel have said otherwise. Netanyahu turned to President-elect Trump for support and got it, so the damage will be undone that Obama wrought over this whole antisemitic affair.

Obama also showed nothing but contempt for Netanyahu and Israel in his interview, basically saying they get upset repeatedly over nothing. I would not call arming Iran and letting them go nuclear nothing. I would not call feeding tiny little Israel to Arab wolves nothing. Of course military and intelligence cooperation have continued… we have no choice thank goodness. But it’s not for wont of trying on Obama’s part. He also continued to slap at Israel over her rightful settlements in the interview. Obama is nothing short of a horrific monster… thank God he will be gone in three days. 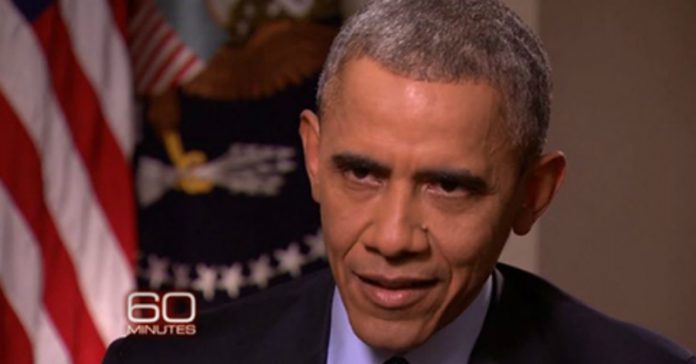 President Barack Obama told “60 Minutes” that he made the call for the U.S. to abstain from a vote on a U.N. Security council resolution condemning Israeli settlements, allowing the resolution to pass, and that doing so didn’t fray relations between the two countries.

The move caused a major fallout between the United States and Israel, a notion Obama demurred while speaking to Steve Kroft in an interview that aired Sunday.

“I don’t think it caused a major rupture in relations between the United States and Israel. If you’re saying that [Israeli] Prime Minister [Benjamin] Netanyahu got fired up, he’s been fired up repeatedly during the course of my presidency, around the Iran deal and around our consistent objection to settlements. So that part of it wasn’t new,” Obama said in his final interview as president.

“And despite all the noise and hullabaloo, military cooperation, intelligence cooperation, all of that has continued,” he said. “We have defended them consistently in every imaginable way. But I also believe that both for our national interests and Israel’s national interests that allowing an ongoing conflict between Israelis and Palestinians that could get worse and worse over time is a problem. And that settlements contribute. They’re not the sole reason for it, but they’re a contributing factor to the inability to solve that problem.”

Obama has not ever defended Israel, so that is another outright bald faced lie. He has continuously thrown them under the bus in favor of Islamists, dictators and terrorists. He has insulted Netanyahu repeatedly and made it known he hates the guy. Abstaining on the UN resolution was a massive betrayal, not only to Israel, but to the US. In fact, Netanyahu has rock solid evidence that Barack Obama was behind the resolution at the UN. No one should be surprised by that or doubt it for even a second.

Obama’s stance on the Israeli settlements flies in the face of previous administrations. His refusal to acknowledge Jerusalem as the capitol of Israel is also disquieting. What Obama did at the UN was a wicked thing… an evil move that is a first for the US. It must never, ever be repeated. Trump has vowed to protect our ally and stand with them against the UN, no matter what that takes, including defunding them, exiting their ranks and booting them out of our country.

Obama sides with the Palestinians, who are tied to Hamas and ISIS. This isn’t about settlements… they don’t want Israel to exist at all and our president chose to stand with butchers and monsters. Part of Obama’s failed legacy will be the betrayal of Israel and his obeisance to Iran. Talk about going to the dark side.