President George W. Bush remained largely silent during the entirety of the Barack Obama presidency, but he’s now warning Americans that the Obama years will have serious consequences if we don’t learn from his mistakes.

Many Republicans are still upset at Bush for being so vocally anti-Trump, but this is one message that simply can’t be ignored. 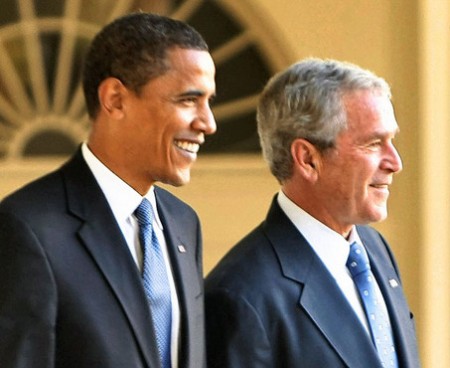 Speaking at the Ronald Reagan Presidential Library in Simi Valley, California, former president George W. Bush seemed to give a veiled criticism of former President Barack Obama’s foreign policy, as well as a word of counsel for President Donald Trump.

The 43rd president warned[3] of what he called “isolationist tendencies,” and the lessons to be learned from “when the United States decides not to take the lead and withdraw.”

“This may be taken as criticism of one of my successors and I don’t really mean it to be. There is a lesson however when the United States decides not to take the lead and withdraw,” Bush told those in attendance.

“Vacuums can be created when U.S. presence recedes and that vacuum is generally filed with people who don’t share the ideology, the same sense of human rights and human dignity and freedom that we do,” he said.

Of course we all know what happened when Obama attempted to withdraw from the Middle East, it allowed ISIS to become more powerful and spread their monstrous ideology to key points and murder countless people for simply not being Muslim.

So Bush doesn’t want this to be seen as criticism of Obama? Fine. Then let’s see it as a word of advice to Trump; do not take you foreign policy leadership cues from Obama.