This right here…[1] this is funny. Congress just delivered a veto-proof bill to Obama’s desk and… gasp! It funds the military. Heh, heh, heh. It blocks Obama from closing down Gitmo. That is freaking fantastic. It also blocks our military forces from being reduced further by Obama. Trump will make sure those forces grow to the size they need to be, but it will take a bit. This bill gives Republicans final say on national security issues, so the adults are now back in charge. Man, that is good news. It also prevents the liberally infested Pentagon from shuttering military bases and facilities as they have been at a suicidal rate across the country. I’m sure many in the military are breathing a huge sigh of relief over this. Now if they can just get rid of the transgender and anti-Christian crap.

The Senate is now more afraid[2] of Donald Trump than Barack Obama. And those who have common sense and actually love this country are able to do what needs to be done after eight long stinking years of stagnation and retraction. The Senate easily passed the National Defense Authorization Act, in a 92-7 vote, which would authorize $618.7 billion in the military spending in the current fiscal year. That includes $67.8 billion in an overseas contingency operations account meant to pay for wartime operations abroad. We may just survive the oncoming conflicts after all. This would not have happened under Clinton… not a chance. 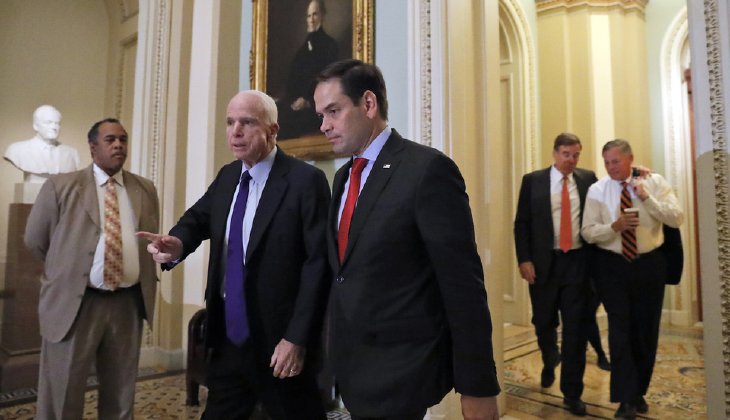 WASHINGTON – Congress is sending President Barack Obama a defense policy bill that seeks to give Republicans the final word on key national security issues. The bill rebuffs his attempts to shutter the prison at Guantanamo Bay, Cuba, and reduce the size of armed forces.

The Senate easily passed the defense legislation Thursday on a vote of 92-7, one week after the House overwhelmingly approved the bill.

The defense bill authorizes $611 billion to run the military in 2017.

The legislation bars the Pentagon from trimming the military’s sprawling constellation of bases and facilities, even though senior U.S. defense officials say there is excess capacity.

The bill blocks the Pentagon’s planned reductions in the number of active-duty troops by prohibiting the Army from falling below 476,000 soldiers — 16,000 more than Obama’s defense budget proposed.

The House passed it[4] last week by a 375-34 vote, more than enough to override a presidential veto if needed. That means that the Dems are on board with this all the way. You know what this is? All of Congress giving Barack Obama the bird on the way out the door. Good times.

The bill also authorizes a 2.1 percent pay raise for troops (badly needed), as well as a boost in the active duty end strength of the Army, Air Force and Marines, but it does not fund the additional F-35s and littoral combat ships in the House version of the legislation. It also includes some of the biggest organizational changes since the Goldwater-Nichols Act 30 years ago, like a restructuring of the Pentagon’s acquisition shop and a cap on the number of National Security Council staff. This is the beginning of rebuilding our military… welcome to the Trump Administration.