Chess Legend Gary Kasparov : If Obama had been President instead of Reagan, I’d still be a Soviet citizen 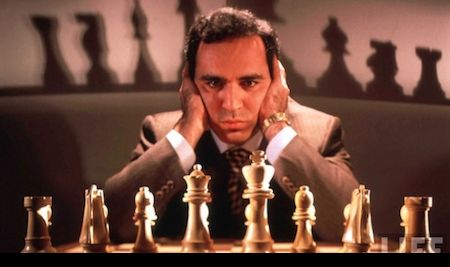 Chess grand master, long-running world chess champion and political activist: Garry Kasparov: observed Saturday that had: Barack Obama: been president during the closing days of the cold war instead of: Ronald Reagan, things would have been very different for him – and not in a good way.

I've said it before, but if Barack Obama had been president instead of Ronald Reagan, I'd still be a citizen of the Soviet Union.

Twitter users all along the political spectrum reacted, and before long, he was retweeted over 2,000 times. Kasparov’s tweet also elicited a lot of responses. GOP political strategist John Weaver tweeted:

@dennisyedwab[3] @Kasparov63[4] His point is exactly right. Still wondering what our president's foreign policy actually is….

Still another Twitter user was reminded of six famous words spoken by Reagan in Berlin in those days:

And another found humor in Kasparov’s tweet, coming from someone who thinks 10 moves ahead in chess:

But he was immediately corrected by WeaselZippers’ editor:

@Kasparov63[4] @JWGOP[11] and we listen to jackasses who play chess why exactly ?

I would answer Yedwab something like this: Kasparov knows chess players, and Obama ain’t no chess player.

This post was used with the permission of Bizpac Review[13].