This is the best idea a Republican has had[1] since Rand Paul’s drone filibuster. 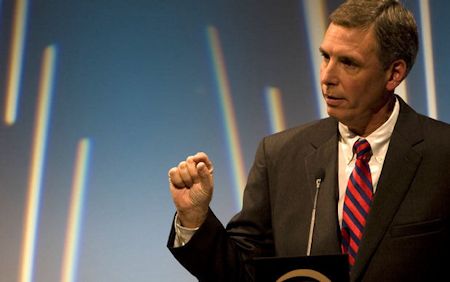 Rep. Tom Rice – the South Carolina lawmaker who’s drafted a resolution to take President Barack Obama to court for tweaking the Affordable Care Act without congressional approval – says he wants to serve the commander-in-chief notice that he can’t selectively enforce the law.

“The resolution just requires a vote of the House, it doesn’t even require a vote of the Senate … to bring a lawsuit against the president for violation of Article 2, Section 3 of the Constitution, which requires that he take care to faithfully execute the laws of the land,” Rice, a Republican, told “The Steve Malzberg Show” on Newsmax TV.

“He can’t pick and choose which laws he wants to enforce. He has to enforce all of the laws,” Rice said.

…He said House action against a president is not unprecedented.

“The House has brought institutional suits to enforce subpoenas where the executive branch has ignored subpoenas in the past,” he said.

“It was determined in those cases that we had what’s called institutional standing. There’s never been a case like this, and we’re looking forward to prosecuting it.”

The courts are creating a damned if you do, damned if you don’t situation when members of Congress try to force the President to obey the law. On the one hand, when individual members sue the President, they’re likely to be told they don’t have standing to sue in the first place, which seems to be a dubious assumption. Why shouldn’t a member of Congress who voted for a law be able to file a suit if that law isn’t being followed? On the other hand, the courts have hinted that Congress as an institution may be able to sue, but it’s also possible they won’t allow it.

That’s ridiculous and kudos to Tom Rice for challenging it and doing something Republicans should have been much more aggressive about from day 1: challenging Barack Obama’s lawless behavior.