Cuba Just Slammed Our President With ONE Word – Is His Trip Backfiring?

The kiddies hate it[1] when the commie dictators fight, don’tcha know. Obama went to Cuba for his legacy. He got to schmooze with the murderous Castros and go to a ball game and do The Wave. All while Brussels burned and people died in the streets. Then he went on to do the Tango in Argentina and hike in the Andes. It was a vacation of a lifetime… so dreamy for a Marxist. But now a paper in Cuba has used the dreaded ‘N’ word against Obama. The headline translated into “Black Man, Are You Dumb?” Why, yes he is. Deeply so, but not for the reasons they are stating. There are just so many others. The reason the commies have their knickers in a twist is because he met with pro-democracy advocates. The horror! And Obama said Cuba needed to change. Fidel Castro didn’t like that either. Is there anyone who isn’t pissed at Obama? At least he’s consistently unlikable. 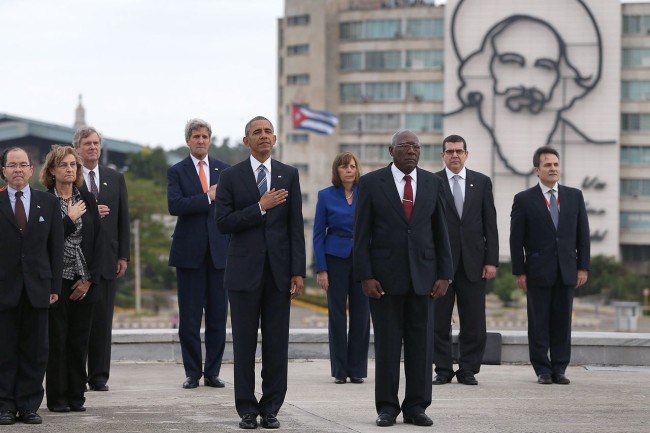 Upon his arrival in Cuba, President Obama called his trip to the island “an historic opportunity to engage with the Cuban people.”

However, the latest salvo against him adds to the negative backlash against the trip from the Cubans he sought to embrace.

An article in the Havana Tribune, a state-controlled newspaper in Cuba, accuses Obama of “inciting rebellion” and uses the word “negro” in reference to Obama in the article’s headline. The article’s title translates in English as “Black Man, Are You Dumb?” Its author criticizes Obama for meeting with pro-democracy activists and suggesting Cuba needed to change.

“Obama came, saw, but unfortunately, with the pretend gesture of lending a hand, tried to conquer,” Elias Argudín wrote. “(Obama) chose to criticize and subtly suggest … incitations to rebellion and disorder, without caring that he was on foreign ground. Without a doubt, Obama overplayed his hand,” he added. Referring to a white, pro-Revolution comedian, Argudín added, “The least I can say is, Virulo-style: ‘Negro, are you dumb?’” They are accusing Obama of starting a revolution. At first I thought that was uproariously funny, then I considered he’s doing that in America already. But even with the evil asshat he is, I don’t think he was inciting revolution while in Cuba. He was too busy taking selfies in front of Che Guevara art. Argudín ridiculed Obama’s calls for increased freedom in Cuba by jabbing at America. “Which freedom–the freedom enjoyed by white police to massacre and manhandle black people?” he wrote. Ah yes, well at least the communists in both countries all sound the same. Raul Castro wouldn’t even meet Obama when he debarked the plane there in Cuba. He’s a joke to them too.