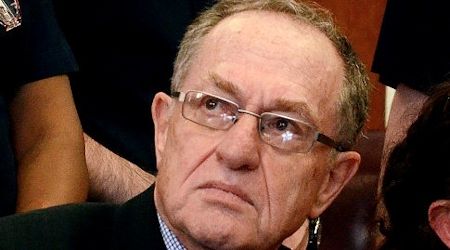 “This is clearly a case of selective prosecution for one of the most common things done during elections, which is to get people to raise money for you,”Dershowitz told Newsmax. “If they went after everyone who did this, there would be no room in jails for murderers.”

D’Souza was indicted last week for making illegal political contributions in the names of others. News of his felony arrest prompted ”Schindler’s List” producer: Gerald Molen to say, “I never had the thought that I had reason to think I had to look over my shoulder until now.”

Prosecutors allege that D’Souza illicitly directed a total of $20,000 in donations, with the money reportedly going to the New York Senate campaign of Republican Wendy Long, a long-time friend, who was handily defeated by Democrat Kirsten Gillibrand in last November’s election.

“This is an outrageous prosecution and is certainly a misuse of resources. It raises the question of why he is being selected for prosecution among the many, many people who commit similar crimes,” Dershowitz said. “This sounds to me like it is coming from higher places. It is hard for me to believe this did not come out of Washington or at least get the approval of those in Washington.”

Dershowitz isn’t alone in his suspicions.

“What struck me first was that it is unusual in cases like these for the FBI to go out and actually arrest someone, simply because it is not necessary,” former federal election Commissioner David Mason told Newsmax. “And even less so in this case because [D’Souza] has enough prominence that it is fairly obvious that he is not a flight risk. White-collar indictments are made lots of times without an arrest being made.”

Law enforcement experts tell Newsmax that if the FBI or another federal agency received a tip about a fraudulent act involving just $20,000, the government would likely show little interest in investigating. Mason notes that a violation of $20,000 in contributions is trivial compared to most cases.

D’Souza isn’t any ordinary defendant. He produced the film, “2016: Obama’s America,” a highly critical indictment of the president released in the months before his re-election bid.

The situation reminds me of something the president said shortly before the 2010 midterms: “We’re gonna punish our enemies, and we’re gonna reward our friends.”