Dionne: It’s Not Easy Being Obama

You know why? Because all you people who criticize him are raaaaacists, per the Washington Post’s E.J. Dionne[1]. Let’s skip all the way to the end to find out how simply awesome Obama is. 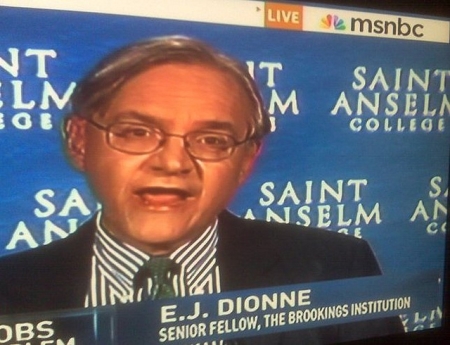 He’s an anti-ideological leader in an ideological age, a middle-of-the-road liberal skeptical of the demands placed on a movement leader, a politician often disdainful of the tasks that politics asks him to perform. He wants to invite the nation to reason together with him when nearly half the country thinks his premises and theirs are utterly at odds. Doing so is unlikely to get any easier. But being Barack Obama, he’ll keep trying.

Can’t you just feel the orgasmic writing of Dionne? But, hey, you people!

You wonder if President Obama sometimes finds himself singing a variant on Kermit the Frog’s anthem about the burdens of being green: It’s not easy being Barack Obama.

This is not simply or even primarily a matter of color, although the president’s racial background has been a source of both opportunity and trial. As the first African American in the White House, he has won an unprecedented level of support among black Americans and the goodwill of enough white Americans to build a national majority.

Yet it’s undeniable that racism lurks beneath so many of the preposterously false charges against him – that this son of Hawaii wasn’t really born in the United States, that he is a secret Muslim who “hates America,” that he’s animated by a “Kenyan, anti-colonial” worldview. Among African Americans, his persistent emphasis on responsible fatherhood, a key theme of his recent commencement address at Morehouse College, is sometimes cast as a way of pandering to white prejudice by hectoring a community to which he owes a large and still-unpaid political debt.

And those groups who were targeted by the IRS? Well, they attack Obama because of race, and are now blaming Obama for the targeting because of race. Heck, they probably attack Obama for spending so much time campaigning and playing golf because of race. The fact that he’s a terrible leader, a hyper-partisan, working to change America to something more akin to Greece has no bearing on it. But, he reaches out to Republicans with Grand Bargains, Dionne writes. He can’t be partisan! Yet, each time Obama finds a way to blow up the bargains (hence the reason Democrats do not want Obama involved in amnesty at this time) and uses that as a pretext to attack Republicans. Almost like it is planned.

Anyway, if you attack Obama, you’re a racist, per Dionne. Liberals never get tired of playing the race card, and, quite frankly, we should expect to see more of this line of feeling as more scandals occur.