Even Jon Stewart is Now Ripping Obama Over The IRS Scandal

How bad is the IRS scandal for Obama? So bad that EVEN JON STEWART is making fun of Obama. 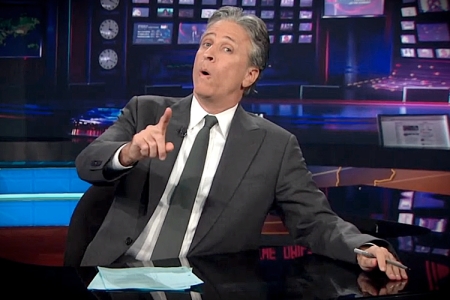 Stewart noted how at Obama’s big press conference on Monday, there was a “question limit of one, total, from the entire American press corps,” but a reporter smartly exploited a loophole by asking four questions in the same question. Obama began his answer explaining that he learned about IRS targeting in the same news reports that the rest of the public found out about from.

Stewart mocked the blasé manner in which Obama answered the question, and pointed out that this is not the first time Obama has claimed to find out news at the same time as the rest of us. Stewart highlighted how Obama said the same thing about the Fast & Furious ATF gun-running scandal and the time when a low-flying plane freaked out everyone in New York City. And Jay Carney admitted that’s the same way Obama found out about the Justice Department seizing AP phone records.

Stewart quipped, “I wouldn’t be surprised if President Obama learned Osama bin Laden had been killed when he saw himself announce it on television.”

Barack Obama has spent his entire presidency getting away with everything. However, now that’s starting to work against him a little bit. The media liberals have already bent over backwards to get him elected once and he can’t be re-elected again; so now they’re going to be tempted to try to get a few shreds of their credibility back by actually criticizing him. Of course, it’s still not one tenth of what Bush would get in the same situation, but they’ll be more willing to take a few shots at him now. Of course, he will still have plenty of defenders and members of the media defending him, too. Let’s face it, if Barack Obama sacrificed his children to Satan on TV, there would be plenty of liberals in the media who’d accuse Republicans of being partisan and racist if they criticized him for it. Still, this scandal is extremely serious and Republicans would have to be fools to do anything other than go after the IRS and Obama like a piranha chomping down on a guppy.

P.S.: Here’s a bonus video from Stewart on the issue that includes one of my favorite lines yet, referring to the IRS apology for its behavior.