While We Were All Focused on Trump, Obama Quietly Did THIS

This is just wrong[1] on so many levels. Truckers are about to have their pensions cut by a whopping 23% if Obama’s Treasury Department approves it. And he has indicated they will. This is for the Teamsters Union and even though they are not in financial trouble, they are seeking to cut pensions to truckers by almost 25% across the board. These men and women have worked their whole lives for a promised pension and with the stroke of a pen, one quarter of their retirement will just disappear. How is that not theft? And they won’t be anywhere near the last. Obama’s coming for all of us and Hillary after him if she’s elected. 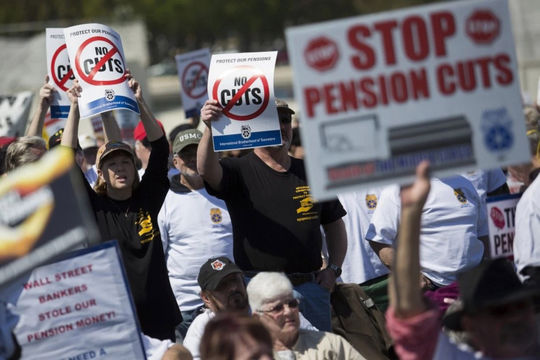 If you or someone you know is a trucker, we have bad news for you: President Barack Obama[3] has found a brand new way to screw you over.

According to The Washington Post[4], a major pension provider for truckers will drastically cut benefits an average of 23 percent for the truckers it covers if it’s approved by President Obama’s Treasury Department.

The Central States Pension Fund handles pension funds for Teamsters union truck drivers from states like Texas, Michigan, Wisconsin, Missouri, New York and Minnesota. Even though it was nowhere near running out of money, it has been seeking to cut the benefits it pays by almost 25 percent across the board.

How is this even close to being legal? Well, it’s part of a bill that was attached as a bipartisan rider to Barack Obama’s 2014 CRomnibus bill, an effort by the GOP establishment and the president to keep the government running at conservatives’ expense while at the same time giving as many political favors to as many people as possible. So, it was baked into the cake and we just didn’t get it. “This is going to be a national crisis for hundreds of thousands, and eventually millions, of retirees and their families,” Karen Friedman, executive vice president of the Pension Rights Center, told The Post. “It’s going to open the floodgates for other cuts,” Friedman added. Obama doesn’t mind stealing from the hard earned money you have labored for all your life. We don’t matter to him. It’s another ‘Let them eat cake!’ moment.