Former CIA analyst Larry Johnson is backing up President Trump’s assertion that he was wiretapped by President Obama during the 2016 Presidential election.

He believes that Trump does have the evidence to call out President Obama, but probably shouldn’t have done so on Twitter because “calling it a wiretap is technically inaccurate.” 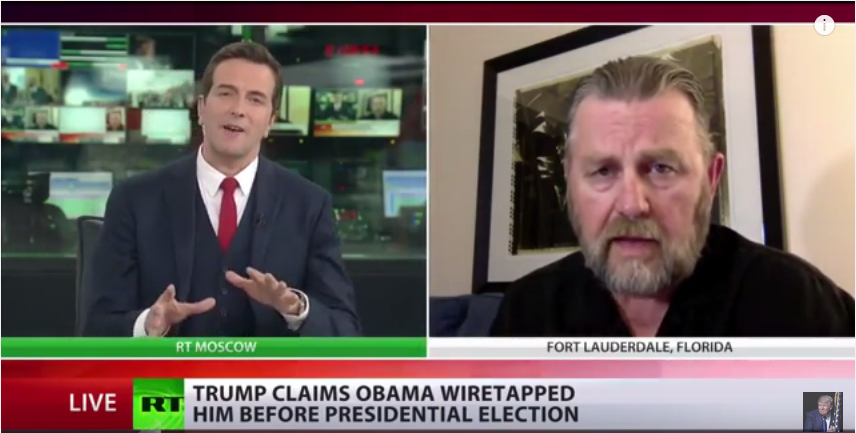 JOHNSON: “Well I think it’s a huge deal. The problem is, Trump probably shouldn’t have done this via Twitter because to call it that it was a wiretap is technically inaccurate, and the denials by the Obama people are like Bill Clinton asking what the meaning of “is” is with respect to was oral sex a sexual act. In this case, I understand from very good friends that what happened was both Jim Clapper, John Brennan at CIA, were intimately involved in trying to derail the candidacy of Donald Trump. That there was some collusion overseas with Britain’s own GHCQ (Government Communications Headquarters). That information that was gathered from GHCQ was actually passed to John Brennan and it was disseminated within the US Government and this dissemination was illegal. Donald Trump was in essence correct that the intelligence agencies and some in the law enforcement community the side of the FBI were in fact illegally trying to access, monitor his communications with his aides and with other people. All of this with and an end to trying to destroy and discredit his Presidency. I don’t think there will be any doubt of that. I think it’s worth noting that the head of the national security, Admiral Rogers, made a journey to Trump Tower shortly after after Trump had won, and in the immediate aftermath of his visit, Jim Clapper and others in the intelligence community called for him to be fired. Now why did Rogers go to Trump Tower? My understanding is to cover himself because he was aware that the NSA had been- the authorities had been misused and abused with respect to Donald Trump.”

If any part of this is true, Donald Trump has more than enough evidence to nail some in the intelligence community to the wall.

And boy, do I hope he does.