From the liberals at Salon: Hillary raised money for the Chinese WHILE she was Secretary of State

No one, with the exception of Barack Obama, rivals the Clintons in corruption[1]. No one. Is anyone out there surprised that she cuddled right up to the Communist Chinese while she was Secretary of State? Not me… she was laying the groundwork for all that red money to flow into the Clinton Foundation. Commies of a feather and all that. 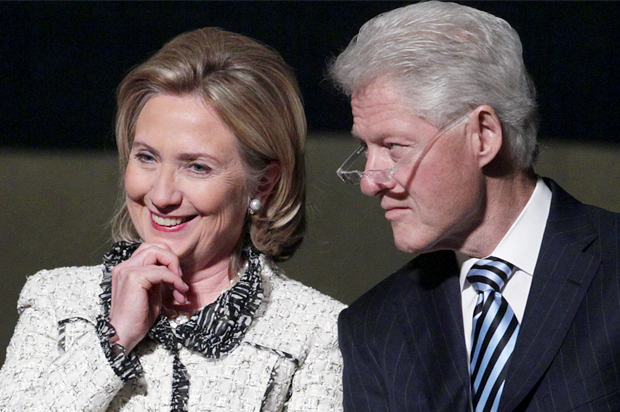 As a second bonus, setting up a fund-raising operation for the fair gave Hillary an invaluable early opportunity to strengthen and expand her network among top American business executives, a potential source of campaign contributions if she decided to run in 2016.

Balderston was a political operative but not a fund-raiser per se, and Hillary turned to two longtime Clinton money bundlers, Elizabeth Bagley and Villarreal, to jump-start the capital campaign. Bagley, a former ambassador to Portugal and a million-dollar donor to the Clinton Foundation, was named as Hillary’s special representative for global partnerships, a role that Balderston would later take over. A former adviser to both Clintons and the treasurer of Al Gore’s 2000 campaign, Villareal had been a “Hillraiser,” one of her big-time campaign cash bundlers. He was also a former member of the board of directors of Walmart Stores.

Villarreal had heard about the Shanghai Expo issue on a trip to China to visit his daughter a few months earlier, when Chinese Walmart executives gave him the same grilling on America’s expected absence from the fair that Hillary would get from government officials. When he heard Hillary had been in China, he told Cheryl Mills he would be happy to help organize a U.S. pavilion— and Hillary tapped him to do just that as the U.S. commissioner for the expo.

In addition to the sheer magnitude of the fund-raising challenge, Villarreal, Bagley, and Balderston faced a set of rules that complicated their effort. They had to raise all the money from private donors, and Hillary couldn’t solicit corporate contributions directly. To make matters worse, several of America’s biggest players in China, including Coca-Cola and GM, were already building their own pavilions to safeguard their own relationships with the Chinese. As a result, they were not likely to contribute money to the official U.S. pavilion.

Hillary had a lot riding on her ability to turn an international slip into a diplomatic coup that saved face for both the United States and China. The talk about her clout as an international celebrity was nice, but could she deliver? Her fund-raising commandos didn’t have the luxury of time. They couldn’t wait for the charitable-giving arms of major corporations to process requests. Instead, they went straight to CEOs, and they made it crystal clear that the ask was from Hillary.

In the summer of 2009, PepsiCo CEO Indra Nooyi, one of the world’s most powerful women, according to Forbes, committed $5 million, a contribution that helped get the ball rolling. Chevron, General Electric, Honeywell, Microsoft, Intel, Yum!, the National Basketball Association, Pfizer, and nearly five dozen other corporations and foundations jumped on board. Just scratching the surface, the list included a who’s who of major donors to the Clinton Foundation. In addition to Microsoft, Yum!, and Pfizer, common contributors to the Clinton Foundation and the U.S. effort at the expo included Bloomberg LP, Citigroup and its foundation, Dow Chemical, Procter & Gamble, and Sidney Harman. (Harman’s company gave to the Shanghai Expo while his family foundation gave to the Clinton Foundation.)

“The Shanghai Expo,” one Clintonworld fund-raising source said, “was a primary example of being able to tap into a base of people that Elizabeth [Bagley] was able to go after.”

In November 2009, nine months after the Chinese chastised her, Hillary returned to Shanghai, where she made a personal pitch for more money. After visiting Boeing’s new two-bay hangar at Shanghai Pudong Airport, where she spoke to a group of fifteen to twenty executives, including the heads of Boeing China, Caterpillar China, and GE China, Hillary made her way to the fairgrounds to take a look at the still-skeletal U.S. pavilion and make an ask.

“I know there are some in the audience who are still contemplating sponsorship or who may be in negotiations with the USA Pavilion team,” she said. “Now is the time to join this effort.” Boeing, the host of her earlier session with executives, doubled its contribution to the pavilion fund from $1 million to $2 million.

Hillary’s personal effort paid dividends for Bagley, Villarreal, Balderston, and America’s relationship with China. They had raised enough money at that point to ensure that America would be present at the fair, but the U.S. pavilion wouldn’t be completed until the last minute.

A carbon-neutral pavilion… what a massive and expensive joke. Not to mention a failure for Clinton, regardless of what she claims. The Chinese don’t give a flying chipmunk about global warming. Take a look at all the major US companies that fell in behind the Hildebeast. Sickening. She pulled off the pavilion, just barely. She claims to have saved face with the Chinese and restored relations. No… she lined her pockets. The Chinese hate America and sooner or later will face us in war. Hillary will be on the wrong side of course with Obama.