Geraldo scolds O’Reilly: Shame on you for ‘minimizing’ Obama, stripping him of ‘his majesty’ 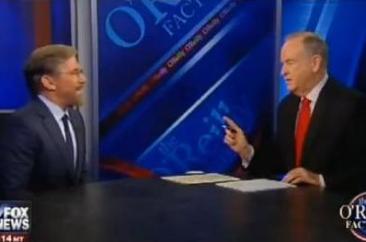 Taking exception to O’Reilly calling Obama a “community organizer,” Rivera described the interview as a “culture clash,” saying it did not offer “the classic decorum and respect and deference that you pay the office,” as seen in a video clip of the exchange.

“It was almost as if you were two equals with two opposite world views coming together for a confrontation,” he said. “It was the president of most of the white guys in America – that’s you – and Barack Obama, the president of almost everybody else – and the discussion was at that level.”

Rivera said he didn’t want to make the issue about race, just after reminding O’Reilly that Obama is the first black president.

“My job is to get information,” O’Reilly responded. “That’s my job. I got it. And I asked him the tough questions that nobody else – no one – has asked him.”

“What you did was strip him of his majesty, so to speak,” Rivera said, seemingly forgetting that America fought a revolution to escape such royalty.

“I don’t think he has majesty. He’s not a king,” O’Reilly shot back. “I respect the office, but here’s the deal: He’s accountable to the people.”

In the end, Rivera’s somewhat bizarre argument makes you wonder if, at age 70, he is beginning to experience mental fatigue.